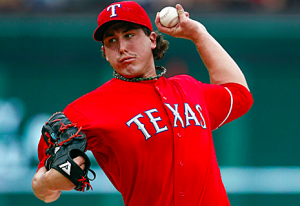 The Chicago White Sox already made a couple notable subtractions from their big league roster this offseason by trading both ace Chris Sale and outfielder Adam Eaton. But on Wednesday, the White Sox added a major leaguer to their roster, signing lefty Derek Holland to a one-year deal. The team is yet to officially announce the deal, but multiple sources are reporting the two sides have agreed to a base salary of $6 million with incentives making the contract worth as much as $8 million.

The 30-year old Holland has spent his entire career with the Texas Rangers, but he became a free agent when the Rangers declined his $11 million option for 2017. The Rangers also made an effort to trade him before they had to decide one way or another on his option, but no other teams was willing to add Holland in a trade at $11 million.

Texas was not displeased with Holland’s performance, as he’s become a solid back-of-the-rotation starter. However, the Rangers couldn’t justify paying Holland $11 million considering his recent injury history. A knee injury limited Holland to just six appearances in 2014, while a should injury limited him to 10 starts in 2015. Holland managed to make 20 starts and two relief appearances in 2016, going 7-9 with a 4.95 ERA, but he again spent time on the DL with a shoulder issue.

Considering all of his recent injuries, Holland was always going to find it difficult to land a multi-year deal, even in a weak free agent class. On a one-year deal, Holland now has a chance to prove that he can stay healthy for a full season and continue to be a reliable back-end starter, potentially setting him up to sign a more lucrative contract next offseason.

With the White Sox trading Sale, they had an opening in their rotation that Holland will help to fill. Obviously, Holland is a big drop off from Sale in terms of performance, but if he can stay healthy, Holland will help to eat up the innings Chicago won’t be getting from Sale this year, while also giving the White Sox a proven major league starter. Holland joins a rotation that also includes Jose Quintana, James Shields, Carlos Rodon, and Miguel Gonzalez. On paper, it’s not a bad looking rotation as long as all five stay healthy, even if it doesn’t measure up to teams like the Indians or Red Sox.

Having those five starters in place will give the White Sox the option of sending their best pitching prospects, some of whom they just acquired in the trades for Sale and Eaton, to the minors, at least at the start of 2017. Carson Fulmer, Lucas Giolito, and Reynaldo Lopez all pitched in the big leagues last season, but all could benefit from further seasoning in the minors. The addition of Holland will help the White Sox avoid rushing their young and talented arms back to the majors.

Signing Holland will also give the White Sox the flexibility to make more trades, either this winter or next summer. There is already speculation that Quintana could be traded, albeit at a high price. Holland himself could become a trade candidate at the trade deadline if he’s able to stay healthy and have a productive season the first half of 2017.

Considering his value as an innings eater if he’s healthy, the value of keeping their young starters in the minors, and his potential trade value next summer, the addition of Holland is a nice move and a smart investment on the part of the White Sox. As for Holland, it’s a chance to hit the reset button and prove that he’s deserving of a better contract next winter.