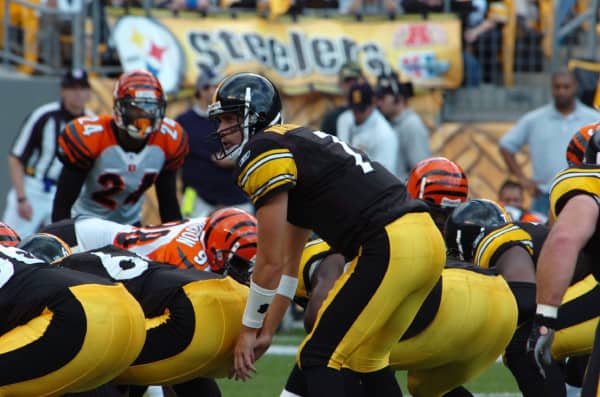 The 2016 NFL season’s opening week is in the books, which means it’s time to look at Week 2’s picks against the spread. Early on Sunday afternoon, we have a tough game to call between two 1-0 teams: the Cincinnati Bengals and Pittsburgh Steelers. Who has the best odds in this one?

Both the Bengals and Steelers have high hopes for this season — championship aspirations even. That should come as no surprise, as they have two of the best teams in the NFL; Cincinnati, with its all-around talent on both sides of the ball, and Pittsburgh, with its dynamic trio of Ben Roethlisberger, Le’Veon Bell and Antonio Brown.

One of those three (Mr. Bell), however, is under suspension for two more games. But that didn’t matter on Monday night, as the Steelers steamrolled the Washington Redskins 38-16. In that game, Bell’s backup — DeAngelo Williams — was fantastic with well over 100 yards and a couple of scores.

The fact that the Steelers played Monday night and are coming into this game on a short week is something to factor into their matchup with the Bengals; that extra day of rest could very well play a factor, especially considering that they also had another day of preparation. Of course, these two teams are extremely familiar with each other. Last season, they played three games against one another thanks to the wild-card seeding. Only one of those three games was decided by more than one score, with the playoff matchup ending with drama and only a two-point finish.

Pittsburgh won that game, but have revenge on the mind when it comes to one player in particular: Vontaze Burfict.

The Bengals’ star linebacker, near the end of the game, took down Brown in a way that many would describe as dirty, giving him a concussion. Ultimately, losing Brown played a major factor against the Denver Broncos in the Divisional Round, as the Steelers fell 23-16.

At the same time, the Bengals will be looking for vengeance, as they ended up losing two of their three games against Pittsburgh last year, including that playoff game.

Suffice it to say, there’s going to be plenty of bad blood in this one on top of the fact that it’s a rivalry game. Overall, that’s going to make it a tough one to call, as many divisional matchups are concerned.

Both of these defenses played well in the first game of the year. The Steelers were able to shut down the Redskins’ rushing attack, making them one-dimensional, which led to two Kirk Cousins interceptions. The Bengals, on the other hand, were able to slow the passing game down of the Jets just enough to pull away at the end on the road.

That said, slowing down the Jets’ passing game is entirely different from slowing down the Steelers’. Brown is healthy, and so is Big Ben. When those two are on the field together, they’re virtually unstoppable. The Bengals don’t have any corners who can match up well with No. 84, and so the safeties are going to have to stay deep in coverage on nearly every play. That’s going to open up the run game for the Steelers, and you know those offensive linemen are fired up to run block against Burfict and the other Bengals.

Ultimately, this will be a close game once again. Both of these teams are good, but the Steelers’ offense will be too much for Cincinnati.

Bets to Make: lay the points, trusting in the Steelers’ offense to outscore the Bengals by four or more. Pittsburgh may have only won by two in the playoffs last season, but scored 33 while giving up only 20 in the regular season game against Cincy at Heinz Field. Also, take the under; in two of the three games between these teams in 2015, the total points scored was 34 or less in two of them.