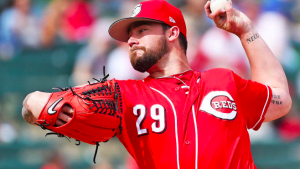 The hits just keep on coming for the Cincinnati Reds, in more ways that one. In one sense, the Reds continue to come up with clutch hits that lead to wins, as they are off to their best start in nearly three decades and midway through April have ascended to the top of the NL Central. However, the Reds continue to suffer injuries to their pitching staff, a trend that started rather early in spring training. Lefty Brandon Finnegan is the latest to fall victim to the injury bug.

The Reds placed Finnegan on the 10-day DL Sunday morning, less than 24 hours after he was removed just one inning into his start against the Brewers. The injury was originally called a strained shoulder, and there were other reports that Finnegan’s problem was with his lat. However, on Sunday, the Reds clarified the injury as a strained trapezius muscle.

The prognosis on Finnegan is not as promising as the Reds originally hoped. Reports indicate that he’ll refrain from throwing for at least two or three weeks before working his way back into shape. Based on that timeline, Finnegan isn’t likely to rejoin Cincinnati’s rotation until at least the middle of May.

“He had a little bit of a sensation after his last start and it seemed like everything was fine,” Reds manager Bryan Price explained after Saturday’s game. “He did all his throwing progressions, threw his side, we couldn’t create any soreness. (He) looked good to go. And then it popped back up in the first inning. It’s a shoulder strain, so he won’t be making his next start.”

Finnegan lasted just two innings in his previous start, surrendering just one run but allowing five walks and four hits. Saturday against the Brewers, those control issues continued, as Finnegan let up three walks in his only inning of work, allowing two runs to score. Equally concerning about Saturday’s start was his lack of velocity. Finnegan didn’t register a fastball greater than 92 mph after hitting 96 mph on the radar gun earlier in the season.

“I couldn’t throw the ball anywhere I wanted to,” Finnegan said Saturday. “I just didn’t have it. I just wanted to battle. We definitely needed it from one of our starters. I wanted to go out there and continue to do well, but could only last one inning. Bryan said he didn’t want me to go any longer, he didn’t want to make anything worse. That’s why he took me out.”

Despite two disappointing starts in a row, Finnegan didn’t appear concerned about the injury after leaving Saturday’s game. However, that has quickly changed with the lefty going on the DL, where he joins fellow Cincinnati starters Homer Bailey, Anthony DeSclafani, and Rookie Davis. Not only are the Reds running short on starting pitchers, but starters leaving early because of injury has put a strain on the team’s bullpen, which has been one of the best in baseball early in the season.

“You do whatever you can. The starting pitching has to take on a bigger workload. There’s nothing we can do about that. That’s the environment we’re in,” Price said. “There was no way to avoid this one because it was one inning and a shoulder strain.”

The Reds have called up Tim Adleman and Sal Romano to help reinforce their pitching staff. Adleman started 13 games for the Reds last year, posting a 4.00 ERA. Romano is the team’s 9th rated prospect, according to MLB.com. He has yet to pitch in the majors, but has started the season with two impressive starts at triple-A. It remains to be seen whether the Reds will insert both into the rotation or use one or both to help reinforce a tired bullpen.

As of right now, Scott Feldman, Amir Garrett, and Bronson Arroyo make up Cincinnati’s starting rotation. Despite a fast start to the season, Cincinnati’s rotation is in dire straights with four starters on the DL. The Reds have plenty of young, promising arms in their farm system. However, with Finnegan out for at least a few weeks and both Bailey and DeSclafani not expected to return anytime soon, the Reds may have difficulty holding onto first place in the NL Central.