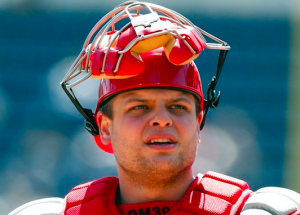 The Cincinnati Reds are about to welcome back a familiar face behind the plate. The club has activated catcher Devin Mesoraco from the 10-day DL after he began the season on the injured list following offseason hip surgery. Following an off day on Thursday, Mesoraco will be ready to make his season debut Friday when the Reds begin a series with the St. Louis Cardinals.

Mesoraco emerged as a potential star for the Reds in 2014, hitting .273 with 25 home runs and 25 doubles. He was an all-star that year and looked poised to continue to be one of the most impactful catchers in the game, but has struggled to stay on the field ever since. He was limited to 23 games in 2015 because of a hip injury that required surgery and played just 16 games last season because of a torn labrum. Another hip surgery forced Mesoraco to begin the 2017 season on the DL.

The question now becomes what kind of player will the Reds be getting in Mesoraco, as he struggled offensively in limited playing time each of the past two seasons. He also hit just .130 with 10 strikeouts over 13 minor league rehab games before the Reds activated him on Thursday. Nevertheless, the Reds are hopeful that the injuries are behind him and Mesoraco is ready to resume a prominent role on the team.

“I think he’s done all the work necessary to feel comfortable behind the plate and have the stamina necessary to catch two or three days in a row,” says Reds manager Bryan Price. “Now it’s a matter of getting comfortable at the plate. I think we’re headed in the right direction with that.”

It’s unclear if Mesoraco will immediately become Cincinnati’s primary catcher or if Price will try to ease him back. The Reds declined to seriously pursue catching help over the winter with the belief that Mesoraco would return. That being said, for the time being, the Reds will carry three catchers with Tucker Barnhart and Stuart Turner both remaining on the active roster.

Barnhart was the team’s primary catcher last season in Mesoraco’s absence, hitting .257 with a .702 OPS, which aren’t standout numbers but solid production nonetheless. He has continued in that role during the early part of this season but has seen a slight dip in his production from last year.

Turner, meanwhile, was selected in the Rule 5 Draft over the winter. He’s gone 4 for 18 in limited action early this season. If the Reds were to take him off the active roster in favor of Mesoraco, they would have to offer him back to the Twins. Keeping him prevents that and acts as insurance in case Mesoraco suffers another injury. Price has also mentioned that the presence of Turner allows him to use either Mesoraco or Barnhart in a pinch-hitting role.

“He’ll also free up that ability to (pinch) hit with whichever catcher is not starting — Devin or Tucker — to come off the bench and give us an at-bat earlier in the game,” Price said. “If Devin’s not starting and they have a lefty out there, I could have him take a pop at somebody. That’s a nice thing to have.”

The tradeoff is that the Reds will have one few reliever in the bullpen after operating with an 8-man bullpen for much of the season. The Reds are currently without arguably their three best starting pitchers. Those injuries and the use of young starters has put a strain on the team’s bullpen, which has thrown the most innings in baseball this season.

Of course, if Mesoraco can make the kind of impact he did in 2014, the Reds will gladly go short in the bullpen. There’s no guarantee he’s ready to return to being that caliber of player, at least right away. But if Mesoraco can get there eventually, it’ll give the Reds a huge boost both this year and in the future as they continue to rebuild.