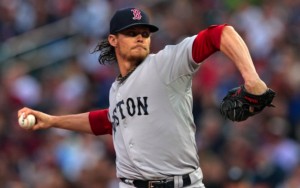 After three weeks and five relief appearances, Clay Buchholz will soon return to the Boston Red Sox starting rotation. Manager John Farrell announced after Friday’s loss to the Seattle Mariners that the team was making a change, with Roenis Elias being demoted to triple-A and Buchholz taking his spot in the rotation. Elias allowed seven runs in four innings against the Mariners Friday night. Buchholz will officially return to the rotation Wednesday when he starts against the Chicago White Sox.

Buchholz was dispatched to the bullpen in late May after posting a 6.35 ERA in his first 10 starts of the season. It was the first time in his career he pitched out of the bullpen. Over the last three weeks, Buchholz has made five appearances out of the bullpen, pitching to a 2.89 ERA over 9.1 innings, a significant improvement over his performance as a starter early in the season.

Of course, Buchholz being moved back into the rotation seems to be more about the struggles of others than the Red Sox believing Buchholz has completely turned things around. Boston has been searching all season for competent starters to fill out the rotation behind the trio of David Price, Rick Porcello, and Steven Wright. On Friday, Elias became the ninth different starter used by the Red Sox this year.

“We didn’t anticipate the number of guys we’ve gone through for 65-plus games, wherever we’re at right now,” Farrell said Friday. “We’ll continue to search. Right now, it’s internal. Right now, that would put Clay back in the rotation. That’s the approach we’re going to take, and hopefully he continues to build on the three innings he pitched (Thursday) night.”

Farrell has praised Buchholz for his recent outings, specifically Thursday when he threw three shutout innings against the Baltimore Orioles, striking out four. “It was a very good outing,” Farrell said. “It was very encouraging from Clay — not just the bottom-line numbers, but the stuff, that was probably the best fastball he’s had all year, and a very good changeup. He was impressive.”

Of course, the question becomes whether Buchholz can continue to pitch that way as a starting pitcher and give the Red Sox five or six quality innings instead of merely pitching in shorter stints out of the bullpen. If Buchholz can’t figure things out in his return to the rotation, the Red Sox will at least know that he gives them a viable arm out of the bullpen. However, it would also put pressure on Boston to make a trade for a back-of-the-rotation starter sometime this summer, as the Red Sox figure to be in a tight race for the AL East division crown the rest of the season.