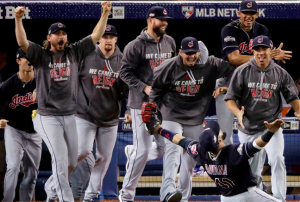 The Indians have won the American League Pennant in somewhat improbable fashion. With starting pitchers Carlos Carrasco and Danny Salazar unavailable due to injury, most believed that the incredible starting rotation that carried Cleveland throughout the regular season would be too diminished to do the  same in the playoffs. However, the Indians swept the Boston Red Sox in the ALDS, holding the best offensive team in the American League to just seven runs over three games. Cleveland then limited Toronto’s high-powered offense to just eight runs in five games, including two shutouts.

Corey Kluber and Josh Tomlin both stepped up in the absence of Carrasco and Salazar, performing like duel aces at the top of Cleveland’s rotation. The Cleveland bullpen also played a starring role in the team’s postseason success, as Andrew Miller and Cody Allen slammed the door shut in the late innings time and time again, with the former being named ALCS MVP.

The Indians have displayed so much pitching depth in the postseason that it made perfect sense that the clinching game of the ALCS was started by rookie Ryan Merritt, who had just one career start before being called upon in the playoffs. “It is absolutely fitting,” said team owner Paul Dolan. “It just demonstrates this was an organizational win. We’ve built a system, so when we needed somebody to step up in a crucial moment, we have people behind them.”

It could be pitching depth that has carried the Indians this far, but some of the players believe the team possesses an indefinably trait that has made them American League champions. “I think ‘it’ is the right word. We just have ‘it,'” explains Miller. “Nobody’s scared. We started a guy that had one career start today, and we had confidence in him, and I think that’s special. It’s just top to bottom, like I said, there’s 25 guys, the staff, top down from ownership, the way they treat us is unbelievable. There’s a good reason why we’re here.”

Of course, after taking some time to reflect on how they got to this point, the Indians spent time after Wednesday’s clinching victory to celebrate and look ahead. “Every time you put on this uniform, what you’re trying to do is make it to the World Series,” Kluber said. “We’re in the World Series. We’re going to be one of the last two teams playing. Our goal is to win that Series, win four games before they do. It is a little bit surreal, but at the same time, I think we’re ready to embrace it.”

“It’s going to be nuts,” Jason Kipnis said about the Indians hosting the World Series opener next week. “Cleveland rallies around its teams pretty well, especially when it comes to the playoffs. They do a fantastic job showing up. They come with it. They’re going to be ready to go, and they’re going to be an advantage for us.”

The Indians now await the winner the winner of the NLCS between the Chicago Cubs and Los Angeles Dodgers, a series that won’t be decided until Saturday at the earliest. Cleveland will have plenty of time to rest before the start of the World Series, but the Indians are already preparing for that all-too-familiar underdog role. “I’ve got news for you: Nobody is picking us next series,” Kipnis said. “They won’t, and we don’t care. If it means that we’re going to win again, none of us care. Predictions mean nothing. The game is decided in between the lines, and that’s where we do our best work.”