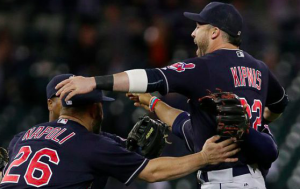 For the first time since 2007, the Cleveland Indians are champions of the American League Central Division. Following Cleveland’s 7-4 win over the Detroit Tigers Monday night, a wild celebration ensued, as the Indians enjoyed the kind of moment that the team, not to mention the city of Cleveland, has had only sparingly throughout their respective histories.

“I want them to celebrate,” manager Terry Francona said afterwards amidst a shower of champagne. “They should be so proud of what they did. We’re proud of them. It’s hard. There’s a lot that goes into winning a division. They deserve every minute of joy they have in there.”

After a slow start to the season, the Indians ultimately emerged from what was once a congested four-team race within the division that included both the Tigers and defending World Series champion Kansas City Royals. Once Cleveland took over first place in the division in early June, the AL Central was theirs to lose, and the Indians made sure they kept a tight hold of it.

“We’ve had some challenges thrown at us, but so has everybody else” Francona said. “We’ve managed to get this far and now we get to play more baseball.”

Unfortunately, the win was not without a tinge of bad news, as starting pitcher Corey Kluber was forced to leave the game in the 4th inning due to a groin injury. The Indians are already missing Carlos Carrasco and Danny Salazar, and they can not afford to lose another starting pitcher so close to the postseason, especially the way Kluber has pitched the second half of the season, going 9-1 with a 2.52 ERA since the all-star break.

Concern over Kluber was somewhat lost amidst the celebration, as he declined to talk about it and Francona did his best to down play the early exit from the game. “He’s good, but he has a groin thing that he’s fighting,” Francona said. “It started getting him in the third and again in the fourth, so I grabbed him. I told him we need to find a way to win a game, but we aren’t going far without him, so we need to get him healthy and let him do what he does.”

Cleveland president of baseball operations Chris Antonetti said that the team will learn more about Kluber’s injury on Tuesday. However, if he’s not able to pitch when the postseason begins, the Indians will have little depth in their starting rotation behind Trevor Bauer, who himself has struggled a bit coming down the stretch. Salazar did throw a bullpen prior to Monday’s game, but only at 75% intensity, and it’s still hard to imagine that he could be ready to pitch in a game by the start of the playoffs.