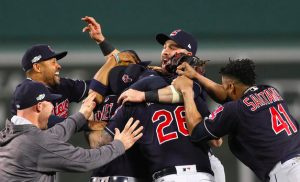 In what could be considered one of the biggest surprises of the 2016 playoffs thus far, the Cleveland Indians finished off a sweep of the Boston Red Sox Monday night by winning Game 3 at Fenway Park 4-3. Despite losing out on home-field advantage in the series, most considered the Red Sox and their dynamic lineup to be favorites over an Indians team that had lost two of its best starting pitchers to injury. But in the end, the Indians made quick work of the Red Sox and will advance to the ALCS to face the Toronto Blue Jays, who also won their ALDS series in three games.

After Monday’s win, the Indian players took great pride in their ability to persevere through injuries and come together as a team when most people counted them out. “Everybody loves each other,” said pitcher Josh Tomlin, who started Game 3, allowing two runs over five innings. “We said it from Day One, it’s not going to take 25 guys to do what we’re capable of going. It’s going to take a 40-man roster and guys stepping up and guys getting traded over here, whatever. It’s going to take a collective group of guys to do what we’re capable of doing.”

With starting pitchers Carlos Carrasco and Danny Salazar, two players who would have undoubtedly started two of the first three games of the series, both unavailable due to injury, the Indians still surrendered just seven runs to the Red Sox in three games. Even with its pitching staff at full strength, it would have been an amazing accomplishment for Cleveland to hold Boston’s lineup in check like that, as the Red Sox averaged a league-high 5.36 runs per game during the regular season.

“It’s just something they’ve done all year long,” said team owner Paul Dolan said mid-celebration. “They just stepped up when they needed to and just [did] what nobody else thought they were capable of doing. The depth of the team, the character of this team, I mean they just swept the Boston Red Sox. That kind of speaks for itself.”

Of course, the Indians also took time to just enjoy the moment with a wild celebration, including outfielder Michael Brantley, who was limited to just 11 games this season due to injury. “Anytime you get to celebrate with this great group of guys that work so hard throughout this entire year, I’m just so glad to be a part of it,” Brantley said in the visitor’s clubhouse after the game.

The fact that the Indians finished off the series in Fenway Park only added to the excitement for some players. “I remember when I was a kid, watching games in this ballpark and seeing how crazy it was,” explained closer Cody Allen, who recorded the final four outs of the game. “It’s a really cool feeling to be part of a game like this, at Fenway Park, where there’s so much history, playing against guys like Dusitn Pedroia and David Ortiz and that team over there. It’s a really cool thing to be a part of.”

The Indians no doubt partied hard in Boston Monday night, but eventually they’ll refocus and prepare to play the Blue Jays in the ALCS starting Friday. “We’re happy, we’re thrilled, we’re honored that we won,” said manager Terry Francona. “We’ll let them blow it out tonight a little bit and then we’ll regroup tomorrow and start thinking about Toronto”