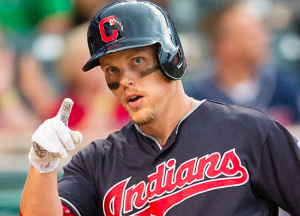 One of the more under-rated players that helped the Cleveland Indians get within a game of a world championship in 2016 was Brandon Guyer, who was acquired in a mid-season trade from the Tampa Bay Rays. On Wednesday, the Indians made sure that Guyer will remain in Cleveland as the Indians continue their quest for a World Series title in the years to come.

Guyer and the Indians have agreed to a two-year extension worth at least $5 million that will cover his two remaining arbitration years. The deal also comes with a $3 million option for 2019, which would otherwise be Guyer’s first year of free agency. The Indians were impressed by how well Guyer fit with the team last summer and felt comfortable keeping him around for at least two more years.

“We made the trade for Brandon because we were in a competitive position and all of those games were so meaningful to us,” explained Indians president of baseball operations Chris Antonetti. “When you bring a guy over to a new environment, you have to be thoughtful not only of how he will fit on the field and how his skill set can help the team win, but how he’ll transition into a new clubhouse and new culture. To Brandon’s credit, he transitioned seamlessly. He fit right in and he made immediate contributions on the field.”

In 38 games with the Indians last year, Guyer hit .333 with a .907 OPS, playing primarily against lefties. In the postseason, he was 6 for 18 with four walks. He’s been particularly productive against left-handed pitching throughout his career, which is part of why he’s so appealing to Cleveland, but Guyer has shown the ability to handle himself against right-handed pitchers as well.

Guyer has a chance to fill a multitude of roles with the Indians in 2017. His primary responsibility will be platoon partner with Lonnie Chisenhall in right field. However, with uncertainty over the health of left fielder Michael Brantley and Rajai Davis signing with the Oakland A’s earlier this month, Guyer may also be needed in left field. The absence of Davis also makes Guyer a potential backup to Tyler Naquin in center field. As a result, Guyer could see time at all three outfield positions this season, making him a flexible and invaluable part of Cleveland’s roster.

“He’s an extraordinary worker who does a great job of preparing himself to be successful,” Antonetti said of Guyer. “And we think he’ll be a big part of our team for the years to come.”

With Guyer coming off the best season of his career, including a productive four months in Cleveland, it’s wise for the Indians to lock him up for another two or three years, as they could end up being the best of his career. Guyer’s ability to hit lefties and play all three outfield spots make him a valuable asset for the Indians, and a player who will be an important piece of the puzzle if Cleveland is going to return to the World Series in the near future.