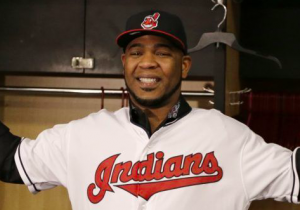 Nearly two weeks after the Cleveland Indians agreed to sign slugger Edwin Encarnacion, the deal is finally official. After a long saga involving a player who many considered to be one of the top offensive players available in free agency in winter, the Indians were finally able to officially introduce Encarnacion at a press conference on Thursday. From the moment Encarnacion donned his new team’s hat and jersey, it was clear why he signed with the Indians; he’s in Cleveland to win.

“Here we go. We’re here,” Encarnacion said, as he addressed the media with family members by his side. “Everybody knows that Cleveland has one of the best teams in the American League and the best chance to win the World Series. So I’m happy to be here. I know they want to win. I know I want to win, and I know I’m the perfect fit for this team, and I know we can do it.”

Of course, the money Encarnacion is getting isn’t bad either. As reported a couple weeks ago, the deal is worth $60 million over three years. The deal could be worth $80 million if the Indians pick up the $25 million option for the 2020 season. There are also attendance bonuses worked into the deal, giving Encarnacion a little extra if he and the team win games and attract people to Progressive Field. Season ticket sales have skyrocketed in the two weeks since news of Encarnacion’s signing first broke.

The Indians brass acknowledged that being able to sign Encarnacion seemed unlikely at the start of the offseason. However, those in the front office believe the signing indicates a commitment by the organization to capitalize on an opportunity to win a World Series. The Indians haven’t won a World Series title since 1948, the longest active drought in baseball.

“As we headed into the offseason, we didn’t expect to have these types of resources,” said GM Mike Chernoff. “Ownership has always stepped up in situations when it seems like the right investment to make. At the Trade Deadline, we didn’t expect to be able to acquire Andrew Miller, and we were able to do that. We’ve always had faith that ownership would be willing to support us in the right moment. This is one of those moments.”

“It took a lot of work to make that happen, both compromises from our side and compromises from Edwin’s side to make this fit and be the right fit for both teams,” Indians President of Baseball Operations Chris Antonetti said about the deal. “And it took a great leap of faith by ownership to make that extraordinary investment.”

Of course, the Indians know the caliber of player they are getting in the deal. Over the last five seasons, Encarnacion is second in baseball in home runs, second in RBIs, and third in slugging percentage, making him one of the most consistent hitters in the game. He’s coming off a season in which he hit 42 home runs and 127 RBIs.

“He not only brings an element of power, but he commands the strike zone extremely well also,” Antonetti said. “That kind of hitter can have a big impact on our team and make the players around him better. All he has to do is be himself.”

On the surface, Encarnacion will help replace the 34 home runs and 101 RBIs Mike Napoli contributed to the Indians in 2016. He also joins a lineup that includes Carlos Santana, Jason Kipnis, Francisco Lindor, and possibly Michael Brantley, who missed most of 2016 with a shoulder injury. With Encarnacion now officially part of Cleveland’s lineup, it’s hard to argue with the Indians being one of the favorites to win the World Series in 2017.