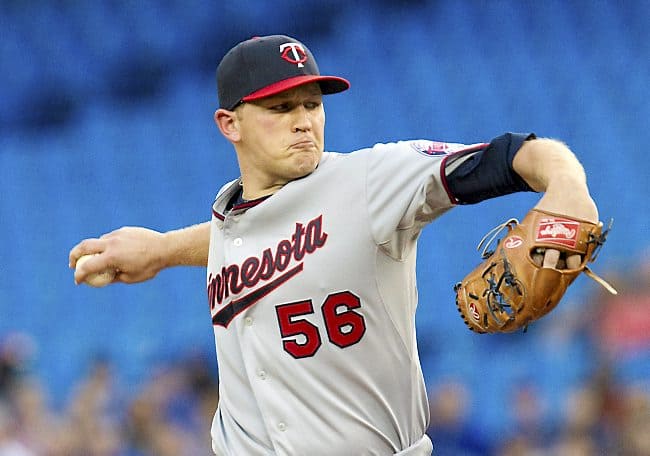 The Twins’ Tyler Duffey gets the start versus Cleveland.

The Minnesota Twins have been struggling mightily thus far in the 2016 MLB season as they currently sit in last place of the American league Central with a 9-26 record entering Sunday’s match-up with the Cleveland Indians. Cleveland sits in second place in the AL Central at 17-16, 5.5 games back from the division leading White Sox.

The two teams will close out a 3-game set Sunday when Tyler Duffey takes the mound for the Twins, where he’ll square-off against Trevor Bauer for the Indians.

Bauer has won his last two starts, including a shutout in his last, and is currently carrying a 3.24 ERA heading into Sunday.

The Twins have struggled to get Duffey much run support over his last 2 games, tallying one run in each contest. He’s 0-2 in those last 2 starts, but still has a solid 2.60 ERA on the year.

It’s hard to point the finger at one specific problem area for the Twins, both their lineup and their bats have been horrid for most of the year and they will enter Sunday’s game having won only 1 of their last 9. Just as concerning for them is their 3-14 record against divisional opponents this year.

The Indians have been average in most statistical categories this as they hover around .500, but are 11-5 within their division, which has helped them into their current 2nd place standing, and in striking distance of the first place White Sox.

The 3-game series is split 1-1 heading into the final frame, Minnesota will be hoping to string together their first back to back wins in 2 weeks, while Cleveland hopes to add some space between them and the 3rd place Royals after Sunday’s meeting.