Posted on August 6, 2016 by Bryan Zarpentine 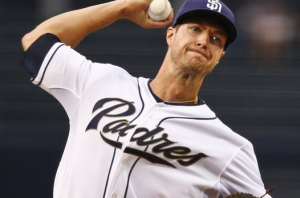 One of the more controversial issues involving the myriad of trades made over the past few weeks was the Miami Marlins returning pitcher Colin Rea to the San Diego Padres after Rea was removed in the 4th inning of his Marlins debut with an elbow injury. That elbow injury has turned out to be serious, as an MRI revealed that Rea will require Tommy John surgery, the Padres announced Friday.

Rea said that on the day of his injury, his velocity declined to its lowest of the season. “That day it just gradually got worse and worse throughout the start, and it got to the point where I just wasn’t able to throw anymore,” Rea explained. “So I knew something wasn’t right. So yeah, it wasn’t like a certain pitch or anything like that, it was just a gradual decline.”

Rea was part of a seven-player trade that also sent Andrew Cashner to the Marlins. When Rea suffered the injury, the Padres were willing to trade back for him and return prospect Luis Castillo to the Marlins. He has not set a date for his surgery, but Tommy John surgery is likely to keep Rea out for the remainder of this season and all of the 2017 season.

“[We’re] disappointed, but all the while he still fits very much into our plans and we have every anticipation of getting him back in, fully healthy and ready to go,” Padres manager Andy Green said. “I think he was kind of resigned to the fact that this was possibly the case. And I think he’s fully committed to rehabbing as quickly as possible. He’s one of the harder workers I’ve been around so there’s no doubt he’s going to be back and be fully what he was before. And probably even a step better.”

Also on Friday, MLB announced that they would review its policies on the way teams share and review medical reports prior to trades. In addition to the injury to Rea, issues have also been raised about San Diego’s trade with the Boston Red Sox involving lefty Drew Pomeranz. MLB does not have established guidelines for overseeing such issues. The Padres did not comment on the concerns raised about their recent trades, but they are confident they did nothing wrong with regard to sharing medical information about their players.

Coincidentally, two of the prospects the Padres have acquired in trades made earlier in the season have gone on to suffer injuries, including one who will soon undergo Tommy John surgery. San Diego did not express any concern or regret over the players they received in those trades.

“We look at each situation unique. You go through each situation, kind of figure out what we feel like is right, what’s the best possible deal for us,” Padres GM A.J. Preller said earlier this week. “Ultimately, in those two cases, we went through the process that we mentioned, the medical process. We took those guys on, they got hurt and you move on, accepting that, hoping to get them better and hoping to get them back on the field as soon as possible.”

The Red Sox have no intention of filing a formal complaint or asking the Padres to alter the circumstances of the trade involving Pomeranz, and the trades with both the Marlins and Red Sox both appear to be closed matters. In the meantime, MLB will look into how teams conduct themselves when it comes to sharing medical information.