It is finally here. College football’s bowl season has begun. A full slate of games ushered in the 2016-17 bowl season, and as could be expected, there was some good play, some bad play, some questionable play, and some stuff that was just downright laugh-out-loud funny.

But one thing is for sure—for these 12 teams, the 2016 season is officially over, and the offseason has begun. Time to hit the gym and get ready for next season. 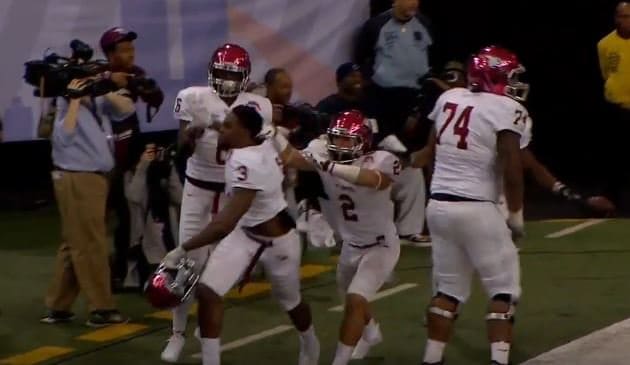 This year’s game was a close one that will get a lot of attention due to the irony involving how it ended. Down 10-3, North Carolina Central quarterback Malcolm Bell hit Quentin Atkinson with a 39-yard touchdown. Atkinson was understandably pumped up but foolishly took off his helmet as he celebrated the score.

Which is a no-no.

He was flagged for unsportsmanlike conduct and the extra point attempt became 15-yards longer. For most kickers, that would be no big deal—as long as no defender makes it through. But one did. Joseph McWilliams blocked the attempt, and Grambling State won 10-9.

The cards were stacked against the Roadrunners. How could they—a .500 team–be expected to stop the nation’s best running game.  As luck would have it, they didn’t do half bad. The Lobos averaged 360.9 yards/game this season but were held to just 219 yards while the Roadrunners gained 246 on the ground

New Mexico, however, made their yards count a little more than the Roadrunners. The Lobos had a 16-6 lead going into the fourth quarter, but UTSA scored a touchdown early in the quarter to pull within three. But then the Lobos went on a 12 play, 75-yard drive that ate up most of the clock and put New Mexico up 23-13.

UTSA tacked on a late touchdown to make the final, 23-20, look closer than the game was. 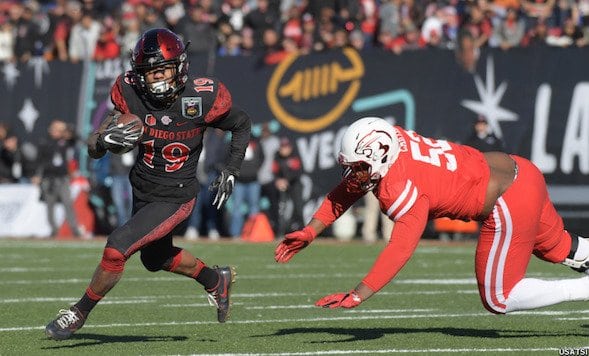 Last season it was Houston taking down mighty Florida State in a bowl game and announcing its presence on the national scene. This season, the role is reversed. Houston is the one losing badly at the hands of a team most college football fans have never watched, the San Diego Aztecs.

Everything started off on the right track for Houston. The defense held the Aztecs to 5 yards in the first quarter, the offense put 10-points on the board, and it looked like it was going to be a good end to the season for the Cougars.

But that was before Houston quarterback Greg Ward Jr. threw three interceptions and the Aztecs scored 34 unanswered points to pull out the win, 34-10.

With 115 yards on the day, San Diego State running back Donnel Pumphrey became the NCAA career rushing leader with 6404 yards surpassing Ron Dayne’s total of 6397. Many have questioned the validity of the new official record since postseason games were included in Pumphrey’s total, but not included in Dayne’s (which would put his mark at 7125).

But the NCAA has baically said, “oh well.” The new record stands.

This game was supposed to be a close one between two teams good at entirely different things. You had the pass-happy team in Toledo and the run-heavy bunch in Appalachian State. Whose defense could make a bigger difference and give their offense a chance?

Toledo quarterback Logan Woodside didn’t have a bad day (18-26 for 247 yards, two touchdowns), but compared to the rest of his season it tied for his third-lowest yards total and was his only game of the season with fewer than three touchdown passes. Kareem Hunt paced the running game with 120 yards and two touchdowns—but it wasn’t enough.

As important as Toledo’s passing game or Appalachian State’s run game was, the three key plays all came on special teams. After the Rockets tied the game up with a touchdown late in the third, 21-21, Darrynton Evans returned the ensuing kickoff 94-yards to put the Mountaineers back on top, 28-21.

Late in the fourth, Michael Rubino gave the Mountaineers the lead with a 39-yard field goal. Toledo quickly moved the ball down the field and got into position to attempt a game-tying field goal—but then took a delay of game penalty to better line up the kick. 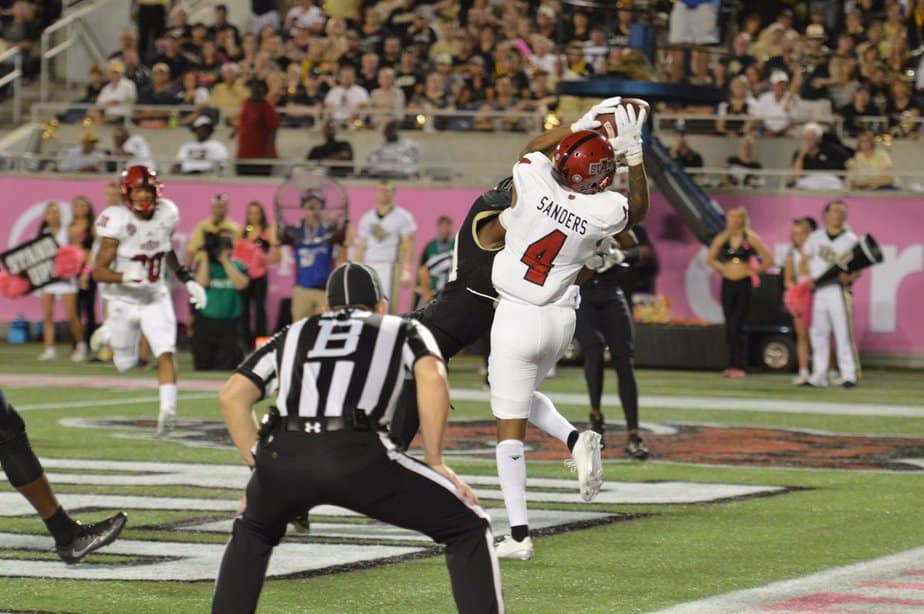 The season didn’t start off well for the Arkansas State Red Wolves, but it sure ended well. After dropping their first four, the last thing they probably expected to do was get a bowl invite, but winning seven of their last eight made them bowl eligible. They received and accepted an invite to the Cure Bowl—and oh, what a bowl game it was!

They got things started with a blocked punt returned for a touchdown early in the first quarter and tacked on another ten points to take a 17-0 lead after one quarter. UCF added a touchdown and field goal of their own to make the score look respectable at the end of the second quarter.

But in the second half, it was all Arkansas State. Quarterback Justice Hansen connected with Kendall Sanders on a 75-yard touchdown early in the third quarter and another early in the fourth quarter to stretch the lead out to 31-13.

After adding the field goal in the third quarter, the UCF offense gained a total of five yards during the rest of the game (before gaining 35-yards son the final drive of the game).

The Ragin’ Cajuns were a long shot to win this game before it began with their so-so defense facing a good Southern Miss offense and with Anthony Jennings at quarterback. To win, they would have somehow needed to at least slow down Nick Mullens while Jennings had the game of his life.

Jennings was terrible (8-20 for 95 yards, one interception; 20 carries for 19 yards and two touchdowns). Mullens completed 25 of 40 passes for 346 yards, two touchdowns, and an interception. He had a great time playing catch with Allenzae Staggers who hauled in 11 of those completions for 230 yards and a touchdown.

Ito Smith chipped in 138 yards and two touchdowns on the ground (26 carries) and caught one pass for six yards and a touchdown as Southern Miss easily won, 28-21.

The game could have been a blowout, but two turnovers by Mullens set the Ragin’ Cajuns up with a very short field twice (which they capitalized on both times).  The second came in the fourth quarter and allowed Louisiana-Lafayette to pull within seven, but they only got the ball one more time, and Jennings couldn’t get the job done.