College Football Preview: No. 1 Alabama At No. 13 LSU—Does It Get Any Better Than This? 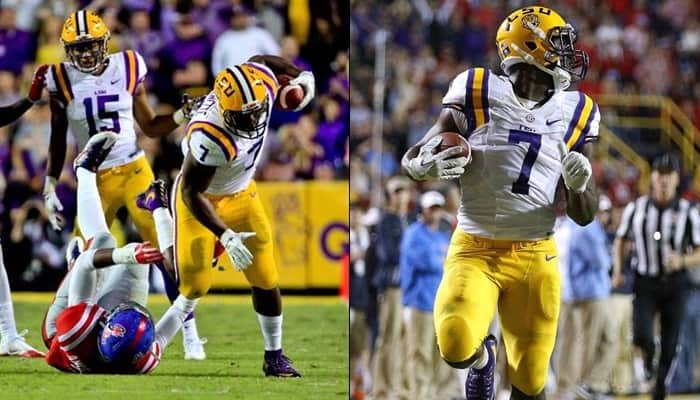 College football fans are in luck this weekend. Like every other weekend, there are plenty of games that will likely be stinkers. Some have a chance of being halfway decent, but there is one imparticular that has the potential for greatness—the Alabama-LSU game.

A few weeks ago, it was looking like the game was going to be one of the many stinkers, but then Less Miles was fired, Leonard Fournette became healthy enough to play, and the Tigers started to look like a good football team again. Alabama, on the other hand, has simply gotten better and better every week—and now the weekend is here.

A win for Alabama will simply cement its status as the No. 1 team in college football and practically guarantee a spot in the playoffs (even if they lose to Auburn or in the SEC Championship game). A win for LSU could put the Tigers within range of taking a playoff spot should Michigan, Clemson or Texas A&M lose (or play bad enough against a weak opponent).

But can they do it? Can LSU do what has appeared to be impossible this year and beat Alabama?

To have any chance opponents must do two things—keep the Crimson Tide offense off the field and play mistake-free football.

The best way to keep an opponent’s offense off the field is to keep your offense on it—with a dependable running game. If your offense holds onto the ball, the other team can’t score. With Leonard Fournette and Derrius Guice carrying the ball, the Tigers certainly can hold onto the ball. So far this season the duo have combined for an average of 239.9 yards a game (No. 20).

The Tiger running game has done well even without both of their running backs being available on game day for much of the season. Fournette has battled injuries all season, but finally returned to action two weeks ago against Ole Miss and made a heck of a statement with 16 carries for 284 yards and three touchdowns.

Running the ball against Alabama is easier said than done; something that Fournette knows all too well. Last season he gained just 31 yards against the Tide and as a freshman just 79 yards. This year it will not be any easier. Just like last season, Alabama has the No. 1 run defense in the country.

Of course, it helps if your team comes away with points in the process, which is not something the Tigers have excelled at this season. LSU is averaging 29.9 points a game this season (No. 61) and has not done well in the red zone. They have made it to red zone 20 times this season, come away with points on 15 of the trips, and with touchdowns on 13 of them (No. 90).

To help get the run game going, LSU will probably try to utilize the play-action pass as much as they can. Alabama will be looking to stop Fournette forcing the cornerback into one-on-one coverage. If Danny Etling can connect with Malachi Dupre a few times downfield, Alabama may be forced to respect the pass a little more—which could help open running lanes for Fournette. 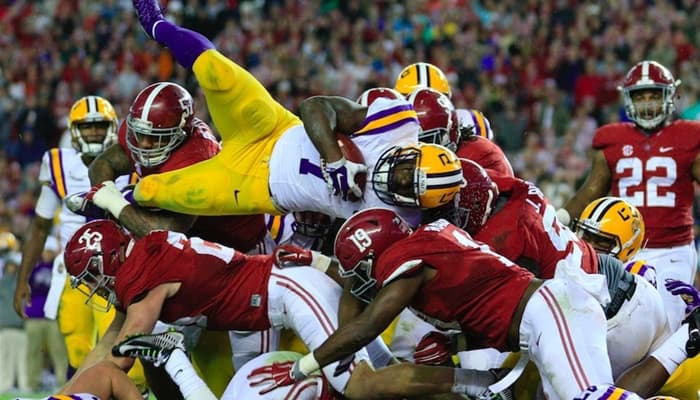 Running lanes or a passing game will mean little if the Tigers lose the turnover battle. No one is better at taking advantage of mistakes than Alabama who has returned nine turnovers for touchdowns this season. LSU isn’t exactly turnover prone, but the Tigers have lost six fumbles and thrown five interceptions this season.

Whatever LSU attempts on offense will matter little if they can’t stop the Alabama running game. Between Damien Harris, Jalen Hurts, Joshua Jacobs, and Bo Scarbrough, the Crimson Tide have one of the best running games in the nation (No. 11; 264.8 yards). They could just as easily keep the LSU offense off the field by controlling the ball themselves.

But LSU’s defense is good against the run (No. 8; 104.1 yards/game) and will not be easy for Alabama to exploit.

This one will come down to who can get their run game going and slow the other’s down. LSU would love to end its losing streak to Alabama (five games; last win was in 2011). Along with ending the losing streak, a win could vault the Tigers into playoff contention despite their two early season losses.

As for Alabama–they just want to do what Alabama does. Roll tide.