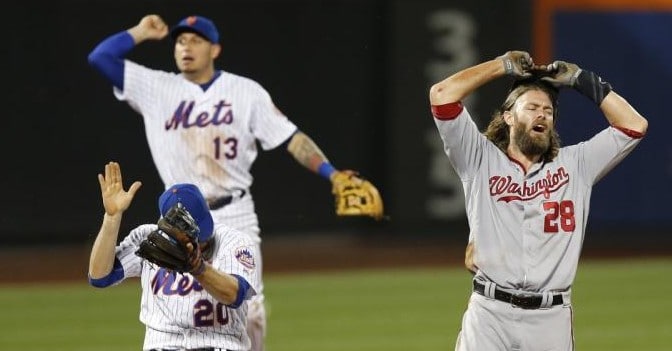 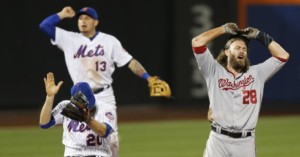 An interference call on a possible double play in the 9th inning of Thursday’s game between the New York Mets and Washington Nationals led to an argument after the game between Nationals GM Mike Rizzo and umpire Jim Joyce. The two reportedly had a heated exchange following the game in the hallway that separates the two clubhouses at Citi Field.

With Jayson Werth on first base and no outs in the top of the 9th, Washington second baseman Daniel Murphy hit a sharp ground ball to the left side of second base. Mets shortstop Asdrubal Cabrera made a spectacular play to field the ball and flip it to second base to get the force out on Werth, but the relay throw to first was too late to get Murphy. However, Murphy was called out at first base after the umpires ruled that Werth interfered with Mets second baseman Neil Walker on the throw to first.

The Nationals challenged the call, but it was upheld upon review. The replay shows Werth sliding a little late and going past the bag, no longer touching the base after he slid through Walker. The new interference rule on such plays is written in a way that allows umpires to call interference if the runner doesn’t maintain contact with the base, which was the case on Werth’s slide. The Mets made an interference appeal on a similar play also involving Werth earlier in the game, but that slide was deemed legal.

Had Murphy been called safe, Bryce Harper would have come to the plate as the tying run with one out in the 9th. Instead, Harper batted with two outs and nobody on, striking out to end the game with the Mets winning 9-7. Ironically, the Mets were involved in the play last postseason that many believed prompted a change in the rule on such plays when Chase Utley broke the leg of former Mets shortstop Ruben Tejada on a slide that was ruled legal but most view as a dirty play.

The Nationals were naturally furious at the call, and afterwards Rizzo reportedly yelled “You blew it,” as he passed the umpire crew in the hall on his way to the visitor’s clubhouse at Citi Field. Rizzo and Joyce then exchanged words and had to be held back from one another by the other members of the umpire crew and Citi Field security.

At one point, Joyce yelled at Rizzo to identify himself, which Rizzo immediately did, yelling back his name and title.

“I don’t need it out there either. You want to yell? Yell,” Rizzo reportedly said at one point. “I’m right here.”

“You’re the one that came up and talked to me,” Joyce replied.

Nationals manager Dusty Baker was a little more calm after the game, but was also upset at the call and somewhat perplexed by the ruling. “I know I’ve been told four or five different things from different crews about the rules, and last time, I was told it was going to be a common-sense-type thing,” Baker said. “I don’t know how you teach young players now to break up a double play, because there’s no such thing as breaking up a double play.”

Werth was also confused and upset, especially after his slide earlier in the game was deemed legal. “To me, that’s a clean slide. It’s been a clean slide for over 100 years. There was no spikes involved. I was down early. If the rule is you can’t make contact, then Major League Baseball needs to clarify that. Right now, I think it’s up to interpretation,” Werth said afterwards.

The win moves the Mets within three games of the Nationals for the top spot in the NL East. It also moved New York past the Los Angeles Dodgers and into the top wildcard spot. The Mets and Nationals will play three more games this weekend starting with Friday night’s game that matches up aces Stephen Strasburg and Noah Syndergaard.