Could History Repeat Itself For Mark Sanchez With The Denver Broncos? 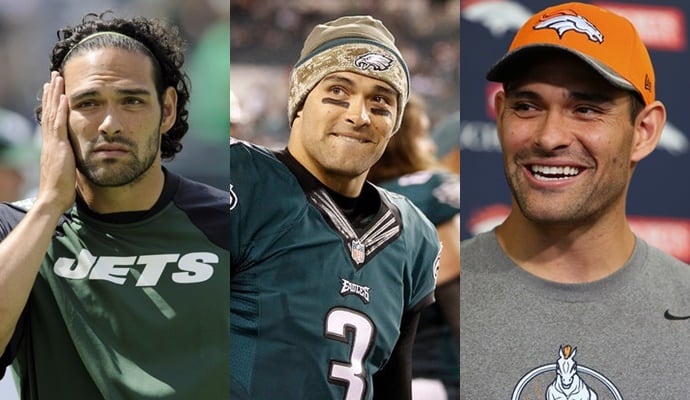 Ask NFL fans about Denver Broncos quarterback Mark Sanchez and the vast majority will say the same thing—this guy sucks. His history made many wonder why John Elway was willing to trade more than a stick of bubble gum for him? He’s terrible!

Sanchez’s career got off to a solid start with the New York Jets, as he guided the team to back-to-back AFC Championship games. He couldn’t take the team to the Promise Land either time and over the course of the next three years, the Jets wouldn’t even come close to getting back. In that time, Sanchez went from a guy that appeared headed for a promising NFL career to one that was the butt of jokes and laughed at by fans everywhere.

The Jets let him go after the 2013 season, but he landed another job fairly quick with the Philadelphia Eagles. For a brief, five-game stretch, fans thought he was the answer in the City of Brotherly Love, but once he played a few good defenses they remembered who he was and the chatter died.

Now he’s in Denver and in the driver’s seat to become the starting quarterback for the defending Super Bowl champions. Surely, this means the Broncos are screwed, right?

Well—not exactly and not because he may lose the competition to second-year man Trevor Siemian or rookie Paxton Lynch.

While the rumor mill supposedly has Sanchez in the lead to eventually win the job, it has also had good things to say about Trevor Siemian and to a lesser extent, Paxton Lynch. Entering camp, head coach Gary Kubiak said all three would get reps with the first time and that it would take time to figure out who the starter would be. Several players have commented favorably on all three–which either means Siemian and Lynch are looking really good or Sanchez hasn’t shown enough to beat out two guys who have yet to throw a pass in an NFL game.

When the depth chart was recently released both Simien and Sanchez were listed as the No. 1 quarterback. But only one guy can start and when the Broncos open the preseason Thursday night against the Chicago Bears—and that honor will go to Sanchez. As long as he doesn’t screw up, chances are good the job will be his for good.

Why? Because as long as he does not have to be counted on to win the game, he is not a bad quarterback.

During his first two years in the NFL, the Jets made it to the AFC Championship game. Getting to the game had little to do with him either season, but he can be credited to having one of the best (if not the best) defenses in the league along with a dominant running game each season.

Sanchez’s numbers were pedestrian at best during his rookie season, but having the No. 1 defense and No. 1 rushing game made up for his mistakes. For his second season (2010), his numbers were better, but it was still the defense (No. 3) and rushing attack (No. 4) that powered the team’s success.

Without a running game, the offense had to count on Sanchez more—but he was unable to get the job done.

The theory certainly worked out when he became the starter for the Philadelphia Eagles in 2014. He had one of the best running backs in the game helping him out (LeSean McCoy) and had one of the league’s top receiver’s too in Jeremy Macklin. The defense was one of the better units in the league (No. 5 overall) and one of the most opportunistic. Philadelphia scored eight touchdowns on special teams and defense that season.

However, in the end, the old Sanchez still appeared. After getting off to a hot start (4-1), he ran into something in the next three games that he had not seen and reminded fans why the Jets let him go—opponents playing good defensive.

LeSean McCoy was shut down in those three which left Sanchez to pull the game out–but he couldn’t. He ended up throwing as many touchdowns as interceptions (4) and the team lost all three.

Denver’s defense is definitely good enough to take a ton of pressure off of Sanchez, but he may need a little more help from the running game. Last season the Broncos running game only ranked 17th, but if they run the ball like they did during Brock Osweiler’s seven starts they may be in good shape (133 yards/game; good enough to rank 6th had it been over the course of the season).

The offense certainly has the tools and the defense will be tough to score on—just like the teams he had in 2009 and 2010 with the Jets and to a degree with the Eagles in 2014.  Anderson and Hillman are both back and the Broncos have a promising rookie in Devontae Booker as well. In the passing game, he’ll have two of the best wide receivers in the business to work with in Demaryius Thomas and Emmanuel Sanders—if he gets the starting nod.

If the Broncos want to be safe and Sanchez doesn’t run into anyone’s behind during the preseason, he would be the safe choice. Should that be, the case, with the team’s defense, it is not hard to imagine the Broncos making it back to the AFC Championship this season.

Of course, if Simien or Lynch can play flawless, mistake-free ball during the preseason, the Broncos may have a hard time deciding who is going to be the man in Week One—one of the guys they think could win the game for them (Lynch or Siemian) or the guy that will not lose it (Sanchez)?