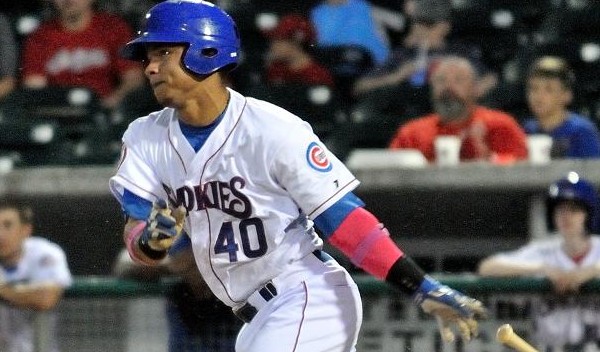 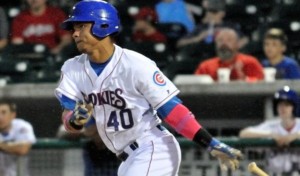 Less than a week after calling him up to the big leagues for the first time, the Chicago Cubs are already doing everything they can to get top catching prospect Willson Contreras into the lineup. Contreras started Thursday’s win against the Miami Marlins at first base, and the team says he may also see time in the outfield.

When Contreras first arrived in the majors, he told the Cubs he could play anywhere, although the initial plan was for him to be part of a three-man rotation at catcher with Miguel Montero and David Ross. However, with Anthony Rizzo out of the lineup Thursday due to a back injury, the Cubs inserted Contreras in his spot rather than shifting the infield around so that Javier Baez or Kris Bryant could play first base.

“I have no problems playing first base,” Contreras said Thursday. “Once they told me, ‘You’re playing first base,’ I said, ‘OK, I’m ready to play first base. No problem with that.’ I want to play every day, I want to do the little things to win the game, to make the playoffs, to make the World Series. I’ll do everything for my team.” In his minor league career, Contreras has played mostly catcher, but he has almost 800 innings of experience at third base and logged over 150 innings at both first base and in the outfield.

Not surprisingly, Chicago manager Joe Maddon likes the versatility that Contreras has. “With the injuries we’ve had, you’ve got a young guy coming up, swinging the bat well and trying to fit him in and making sure the other guys catch, too — if we could get [Contreras] at another position, it would free a lot of things up and help us,” Maddon said.

Obviously, Rizzo experiencing pain in his back created a necessity for Contreras to play first base that won’t always be there, but with Jorge Soler and Dexter Fowler both on the DL, there could be a need for Contreras to play the outfield once Rizzo, who’s listed as day-to-day, returns to the lineup. Chris Coghlan is trying to hold down the fort in left field but is hitting just .156 this season. At the very least, the Cubs could platoon Coghlan and Contreras in left field until either Soler or Fowler returns from the DL.

The Cubs aren’t scrapping any plans for Contreras to spend time behind the plate, but with Montero and Ross also in the mix, there won’t be too many opportunities to get consistent playing time there, leaving the door open for Contreras to get time at other positions. Offensively, Contreras hasn’t had any problems so far, going 5 for 13 with two home runs during his first week in the big leagues, so Maddon will look to get him as many at bats as possible as long as he’s productive.

The only thing that could change from Contreras playing multiple positions is the team’s plan to send him back to triple-A for more seasoning at some point this year. Between his offensive production and his defensive versatility, Contreras could prove to be too important to the Cubs to send him back to the minors as planned, making him a big part of both Chicago’s future and present.