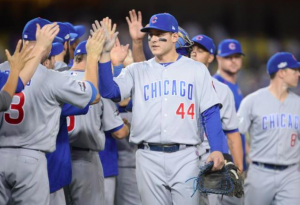 Don’t look now, but the Chicago Cubs are just one game away from the World Series. After falling behind the Los Angeles Dodgers 2-1 in the NLCS, the Cubs have stormed back the past two games, winning Games 4 and 5 in convincing fashion to take a 3-2 series lead. The Cubs will now have two opportunities to clinch a spot in the World Series at Wrigley Field with Game 6 and Game 7, if necessary, being played in Chicago.

With the series tied 2-2 heading into a pivotal Game 5 Thursday night in Los Angeles, Jon Lester stepped up and delivered his third outstanding performance of the postseason. The Dodgers did their best to test Lester’s perceived weaknesses when it comes to fielding his position and holding runners on base. But Lester answered the call, allowing just one run on five hits over seven innings.

“That’s what he does. He’s a big-game pitcher,” said catcher David Ross after the game. “He never disappoints. This guy is a true competitor in every sense of the word.”

Dodgers manager Dave Roberts was not shy before the game in saying that the game plan was to get into Lester’s head. But after the game, Roberts could only tip his hat at Lester being up to the challenge. “It’s certainly a credit to him,” Roberts said. “I thought that when we did get a little bit of traffic I thought that we put a little pressure on him. But he’s a great pitcher. He’s a great pitcher who competes and finds ways to get outs when he needs to.”

Cubs manager Joe Maddon knew going in that the Dodgers would try to test Lester’s fielding and his ability to hold base runners, but he told his pitcher just to focus on the hitter and not worry about everything else. “There’s always plotting going on,” Maddon said. “And like I said before, the most important thing is that Jon throws the ball well to home plate. That’s the important part.”

In 21 innings this postseason, Lester has allowed just two runs, making him one of Chicago’s most important players during the playoffs. “What he does best is he throws pitches very well, up to 94 miles an hour where he wants to, and then he has a great cutter and a curveball,” Maddon said. “So why would I want him to get mentally infiltrated with trying to hold runners if he’s not comfortable? He was glad he went out and pitched tonight like he did.”

Of course, not to get lost in the shuffle is the fact that Chicago’s bats have gotten the job done for the second straight game after the Cubs were shutout in Games 2 and 3. For the second straight game, shortstop Addison Russell hit a two-run home run, officially breaking him out of the slump he’s been in throughout the postseason. The Cubs have now scored 18 runs on 26 hits over the past two games, giving them a world of confidence as the series shifts back to Chicago with a chance to clinch the National League Pennant.

Of course, the Cubs aren’t counting their chickens before they hatch when it comes to the World Series; we all know the organization has been burned in the past when on the brink of winning a Pennant. “It’d be foolish for us to get ahead of ourselves, because any time you think like that, it never goes the way you want it to,” said third baseman Kris Bryant. “We’ll be ready to go for Game 6.”

In order to finish off the Dodgers, the Cubs will have to beat at least one of the two pitchers who shut them out in Games 2 and 3, Clayton Kershaw and Rich Hill. Kershaw will pitch Game 6 on Saturday night in hopes of forcing a Game 7, which Hill is lined up to start. However, as the series moves back to Chicago, the Cubs appear to be firmly in control and on the verge of history.