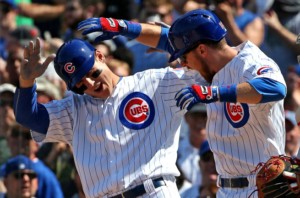 By now, everyone should have had enough time to recover from a thrilling conclusion to the NLDS and prepare for what could be an equally compelling NLCS between the Los Angeles Dodgers and Chicago Cubs. The Dodgers, in particular, will need to refocus quickly, as they begin the NLCS on the road in what should be an electric and boisterous Wrigley Field on Saturday night.

If the Cubs are in the postseason, it wouldn’t be right not to mention Chicago’s unique history with playoff baseball and the role that curses may or may not play. There were no curses in the NLCS a year ago when the Cubs were dismantled by the Mets. But this time around the Cubs are heavy favorites to advance to the World Series, which changes the scenario somewhat. Even when the Cubs were three outs away from having to play a Game 5 with the San Francisco Giants in the NLDS, there was growing nervousness (i.e. panic) among Cubs fans, which speaks volumes about their mental state.

Clearly, comfort and confidence among Cubs fans can quickly dissipate, which can change the atmosphere inside Wrigley Field, something we saw following the Bartman incident in 2003. If the Cubs lose Game 1, or are trailing at any point in the game, Chicago can quickly become Panic City among fans, putting extra importance on winning Game 1 for both sides.

After using three of their starting pitchers to win Game 5 of the NLDS, the Dodgers will have no choice but to start Kenta Maeda in Game 1. Maeda struggled against the Nationals in the NLDS, as his first October stateside has not been kind to him. This will also be the first time he pitches in Wrigley Field, which isn’t always an easy experience for pitchers. Clearly, there’s not a lot working in Maeda’s favor heading into Game 1.

Believe it or not, Yasiel Puig could be the X-factor in Game 1. Considering Lester’s dominance of the Dodgers in two starts this season, it may be up to someone on the periphery to step up and make a difference. Puig will likely start the game over lefty Josh Reddick to help Los Angeles load up on right-handed hitters to face Lester. Puig didn’t play in either game against Lester this year, so perhaps he can step out of the woodwork and be a surprise hero for the Dodgers in Game 1.

It’s impossible to ignore Lester’s success against the Dodgers this season, as well as his overall greatness in the postseason and his fantastic start against the Giants last week. It’s also tough to envision Maeda having a good night against a fierce Chicago lineup that is probably upset that it couldn’t produce more runs in the NLDS. The Dodgers figure to come out a little flat Saturday night after Thursday’s win over the Nationals, while the favored Cubs will have no such problem with the Wrigley crowd behind them. Chicago wins 9-4.