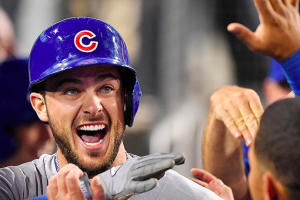 After being shut out in Games 2 and 3 of the NLCS, the Chicago Cubs have responded in a big way, scoring 18 runs on 26 hits over the course of Games 4 and 5 to take a 3-2 series lead against the Los Angeles Dodgers. The series now shifts back to Chicago for Game 6 on Saturday night, with all the momentum in favor of the Cubs, who are one win away from their first World Series appearance since 1945. Meanwhile, the Dodgers will be playing in their third elimination game of the postseason, winning the previous two against the Washington Nationals.

Even though the Dodgers are the team facing elimination, there is still a great deal of pressure on the Cubs, who are fighting history. Chicago’s fan base is all too aware of the past trouble their team has had at this stage of the postseason. The 2003 Bartman incident still lingers in the Wrigley Field air, and could create just a little bit of nervous energy with the Cubs one game away from winning the pennant. Cubs fans will certainly be thinking about it, but whether it’ll have an impact on the players remains to be seen. Just as it was during the first two games of the series, it’s important for the Cubs to avoid falling behind early or making a mistake early in Game 6 to avoid bad thoughts from creeping into their head.

The Cubs will look to Cy Young frontrunner Kyle Hendricks to help close out the NLCS for them. Manager Joe Maddon has had a short leash for Hendricks in the postseason each of the past two years, but in Game 2 against the Dodgers he did allow Hendricks to pitch into the 6th inning, and despite taking the loss, he gave up just one run on three hits. However, Hendricks got himself into trouble against the Dodgers by walking four, and he needs to avoid doing the same in Game 6. With a fresh bullpen, Maddon won’t be afraid to give Hendricks another quick hook.

On the other side, the Dodgers will send Clayton Kershaw to the mound for Game 6, as he looks to build on his incredible performance in Game 2. Kershaw tossed seven shutout innings, allowing just two hits and one walk, and despite Chicago’s offensive explosion the past two games, the Dodgers have to feel good with their ace getting the start. A lot has been asked of Kershaw this postseason, especially considering how much time he missed with a back issue during the regular season. However, Kershaw needed just 84 pitches to get through seven innings in Game 2, and he’ll be pitching on five day’s rest, so he’s as fresh and prepared for Game 6 as he’s going to get.

If Kershaw is unable to pitch a complete game, the Los Angeles bullpen could be the biggest X-factor in Game 6. If Kershaw can pitch seven innings the way he did in Game 2, Dave Roberts will have no problem trying to get two innings out of closer Kenley Jansen. However, the bridge between Kershaw and Jansen could be problematic. Joe Blanton has been hit hard this series, and Pedro Baez has had his issues as well. The Dodgers don’t want to have to rely too heavily on their bullpen, but they may have to, and that would certainly tip the scales in favor of the Cubs, who have feasted on the Los Angeles bullpen during the NLCS.

With Kershaw on the mound, the Dodgers are betting favorites to win Game 6 and force a Game 7. Kershaw has a rather uneven postseason history, but he was locked in during Game 2, and so no one should be shocked to see him deliver a similar performance Saturday night. The Cubs should be able to get something against Kershaw, as their lineup looks much better than it did just a few days ago, but the Dodgers will score some runs too, and Jansen will be able to close out another win for Kershaw. Los Angeles wins 4-3.