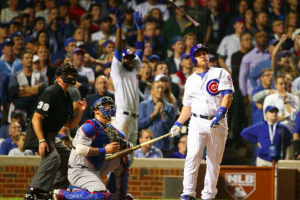 Of all the heavy hitters the Chicago Cubs have on their roster, it was somewhat forgotten catcher Miguel Montero who delivered the biggest hit in Game 1 of the NLCS to lift the Cubs to victory. The Los Angeles Dodgers loaded the bases with no outs in the top of the 8th, but only scratched out two runs. The Cubs loaded the bases in the bottom half of the inning, and Montero made sure each and every base runner was brought home, giving them a 1-0 series lead heading into Game 2 Sunday night.

Somewhat lost in the shuffle after Chicago’s eight-run outburst in Game 1 was the excellent defense the Cubs played. Left fielder Ben Zobrist threw out a base runner at home plate and center fielder Dexter Fowler made a couple impressive plays in center field, among several other defensive gems the Cubs had in the field. The Cubs were hurt by some defensive miscues in last year’s NLCS, but they are a much better defensive team this season, and the ability to play quality defense is going to continue to help them in the NLCS.

Game 2 will see the return of Clayton Kershaw, who returns on regular rest, minus the pitches he threw to get the save in Game 5 of the NLDS. Of course, Kershaw was knocked around a little bit in his two starts against the Washington Nationals in the NLDS, even though he did pick up the win in Game 1. At times he’s showed signs of dominance, striking out 19 in 12.1 postseason innings, but he’s taken his lumps as well. His career postseason numbers are rather unimpressive for a pitcher of his standing, and now would be a good time to deliver an ace-like performance for the Dodgers.

The three-time Cy Young winner will be opposed by this year’s Cy Young favorite Kyle Hendricks. In the NLDS against the San Francisco Giants, Hendricks was given an early hook, leaving after 3.2 innings, although he gave up just two runs on four hits. Hendricks failed to last five innings in his two playoff starts last year as well, so his brief playoff track record is not all that impressive. He took the loss when he faced the Dodgers in June, allowing four runs in five innings of work, so Joe Maddon may not hesitate to give Hendricks another early hook if he struggles in Game 2, as the Dodgers may feel like they have a chance to get to him early.

Corey Seager and Chase Utley are the X-factors in Game 2. They are hitting at the top of the order for the Dodgers, and Los Angeles desperately needs them to get going and set the table for guys like Justin Turner, Adrian Gonzalez, and Joc Pederson. After two home runs early in the NLDS, Seager has gone ice cold. He did have a hit in Game 1, but the Dodgers need to get him back on track and become a catalyst at the top of the order. Utley was not in the starting lineup against lefty Jon Lester in Game 1, but he’ll be back in Game 2, and the Dodgers also need him to get going. He has a long track record of success in the postseason, but is just 3 for 17 this year. If nothing else, Utley needs to find a way to get on base and set the table for other players.

Kershaw’s presence on the mound makes the Dodgers slight favorites in Game 2, despite all the positive momentum the Cubs have after Game 1. Against Hendricks, the Dodgers will finally be able to settle in and get going offensively. Kershaw won’t be brilliant, but the Cubs still aren’t getting consistent production outside of Kris Bryant and Javier Baez, so the Los Angeles ace will be able to traverse six innings without too much damage, helping the Dodgers steal a game at Wrigley. Los Angeles wins 6-4.