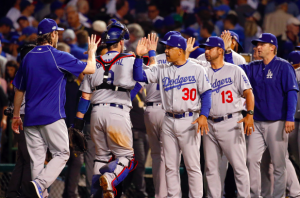 The Chicago Cubs and Los Angeles Dodgers have had an off day to digest Clayton Kershaw’s dominating performance in Game 2 of the NLCS Sunday night, as well as talk of the Cubs stealing signs. All of that sets up a pivotal Game 3 Tuesday night, as the series is tied 1-1 with the next three games being played in Los Angeles.

Facing Kershaw is a viable excuse for Chicago’s poor offensive performance in Game 2, but even before that the Cubs were underperforming during the postseason. There have been a few key home runs here and there provided by either ancillary players or pitchers that have helped lift the Cubs to wins in a few games, but outside of Kris Bryant and Javier Baez, Chicago is still not getting consistent production out of anyone. Anthony Rizzo and Addison Russell have started every game of the postseason, but each player has just a single hit in six playoff games. Dexter Fowler and Jason Heyward haven’t done much either, and unlike the NLDS, the Cubs won’t have the San Francisco bullpen to help bail them.

One has to wonder if manager Joe Maddon is going to entertain any lineup changes prior to Game 3. Heyward could be a candidate to sit in Game 3, and while it’s less likely, Russell and Rizzo going to the bench could also be considered. With the versatility of Ben Zobrist and Willson Contreras, as well as the presence of Jorge Soler, Chris Coghlan, and Albert Almora Jr., Maddon will have plenty of options if he wants to make changes.

Something that could spur Maddon to make changes in Game 3 is the fact that the Dodgers will send lefty Rich Hill to the mound. Hill did not fair well in either start in the NLDS, although one of those starts did come on short rest, and he should have plenty of recovery time for Game 3. Hill’s poor postseason numbers aside, he had an outstanding season when he was healthy. With the struggles of Chicago’s lineup recently, it’s possible that Hill could shutdown the Cubs in Game 3 the way Kershaw did in Game 2.

The Cubs will send Jake Arrieta to the mound in Game 3. Arrieta provided six strong innings, as well as a home run with the bat, during his NLDS start against the Giants. He tossed seven shutout innings against the Dodgers earlier this season, striking out eight and allowing just two hits against Los Angeles in late May. Arrieta is certainly more than capable of repeating such a performance in Game 3, as the Dodgers aren’t exactly thriving offensively either.

After accounting for the only run in Game 2, Adrian Gonzalez may be the X-factor the Dodgers need to step up in Game 3. Despite a slow start to the postseason, Gonzalez has hits in six straight games, including two home runs. He also has five RBIs in the last four games, going back to the NLDS against the Nationals. Gonzalez is also the only player the Dodgers have who has more than seven career at bats against Arrieta, so he’s seen plenty of the reigning Cy Young winner. Gonzalez is a solid 6 for 21 against Arrieta with a double and home run, so once again he may be the guy the Dodgers look to for offense.

Despite being the road team and being shut out in Game 2, the Cubs are slight favorites in Game 3. This is a pivotal game for both teams, and the Dodgers need Hill to be much better than he’s been in his previous two starts in order to keep the Chicago lineup from heating up. Meanwhile, there’s less concern about the kind of performance the Cubs can expect from Arrieta, which is what gives them the edge in this game. Neither team will do much offensively, but the Cubs will get another timely home run from an unexpected source. Chicago wins 2-1.