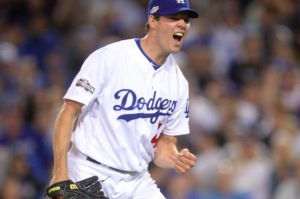 So little has gone according to plan during the MLB playoffs thus far, including the NLCS in which the Los Angeles Dodgers have taken a 2-1 series lead over the heavily favored Chicago Cubs. Chicago’s supposedly potent offense has been held in check the last two games, allowing the Dodgers take the series lead with two more games left to play in Los Angeles, including Game 4 Wednesday night, a game in which all the pressure is squarely on the Cubs.

King of the Hill

The Rich Hill that showed up in Game 3 is the Rich Hill the Dodgers thought they were getting when they traded for him on August 1. Hill was nearly as good in Game 3 as Clayton Kershaw was in Game 2. The two southpaws have helped to shut out the Cubs in two consecutive games, with Chicago managing a measly six hits over the last 18 innings. Chicago’s lineup caused nightmares for opposing pitchers the entire regular season, but now the Cubs have undoubtedly had their confidence shaken, as Joe Maddon searches for a lineup that can turn things around and put points on the board. The longer the Dodgers can keep the Cubs from finding an offensive spark, the more likely they are to pull off the upset and keep the Cubs from reaching the World Series.

On the heels of Kershaw and Hill, the Dodgers have another lefty lined up for Game 4 in rookie Julio Urias. The 20-year old southpaw threw two shutout innings in relief against the Nationals during the NLDS, but starting against the Cubs in the NLCS is a different challenge for him. Urias struggled early in his big league tenure, including a start at Wrigley in early June in which he gave up three home runs and was knocked out after five innings. However, over the last two months of the regular season, Urias started living up to his billing as a future ace, including a home start against the Cubs in which he allowed one run over six innings, so he’ll feel good about his chances Wednesday night. Kershaw and Hill had a lot of success throwing breaking balls the last two games, and one would expect Urias to follow a similar game plan.

As for the Cubs, they will start John Lackey in Game 4. Lackey has a wealth of playoff experience, but he was knocked out after four innings in the NLDS against the San Francisco Giants, and he needs to do a lot better against the Dodgers with Chicago now trailing in the series. The Cubs signed Lackey this offseason in part to pitch in games like this, so he will be expected to deliver against a Los Angeles that is feeling confident after scoring six runs in Game 3.

The biggest X-factor in Game 4 will be any lineup changes Maddon makes to help jumpstart Chicago’s lineup. Kris Bryant and Javier Baez aren’t getting much help, as Anthony Rizzo, Addison Russell, Jason Heyward, and even Ben Zobrist continue to produce nothing. After two straight shutouts, Maddon has to shake things up, meaning players like Jorge Soler, Willson Contreras, and Albert Almora Jr. may be inserted into the starting lineup. Any one of them could turn into a surprise hero for the Cubs, who are desperate for someone to step up offensively.

Despite losing two straight games without scoring a run, the Cubs remain betting favorites for Game 4. However, the Dodgers have all the momentum in their favor, while the Cubs will be increasingly aware of the century-old monkey on their back. The Cubs look lost offensively, and facing a third straight lefty may not be the antidote they need, especially considering how good Urias was the last two months of the season. Chicago will score a run, but they won’t produce enough to get a win. Los Angeles wins 4-1.