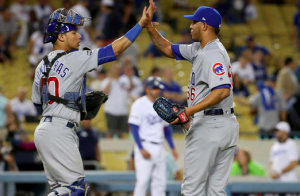 Well, the NLCS is a brand new series. What was once a 7-game series has now been turned into a best of three between the Chicago Cubs and Los Angeles Dodgers. After being shutout in back-to-back games, the Cubs finally delivered the offensive explosion we’ve been expecting from them all postseason. Between scoring 10 runs in Game 4 and knowing that two of the final three games will be played at Wrigley Field, momentum appears to have shifted back in favor of the Cubs heading into Thursday’s Game 5 in Los Angeles.

Despite averaging five runs in their first five postseason games prior to being shutout in Games 2 and 3 of the NLCS, Game 4 Wednesday night was the first time Chicago’s offense really seemed to be clicking since the playoffs began. First baseman Anthony Rizzo and shortstop Addison Russell, who have both endured treacherous postseasons, both had three hits, including a home run, potentially signaling an end to a playoff slump for each player. Ben Zobrist also put together good at bats, while Dexter Fowler helped provide a spark at the top of the lineup, as the Cubs did not have to rely solely on Kris Bryant and Javier Baez for offense.

Of course, it was just one game, and the Cubs did most of their damage in just two innings and almost exclusively against rookie pitchers. It obviously gives Chicago a great deal of confidence heading into Game 5, but one can’t completely discount the possibility that their offensive explosion in Game 4 was just an aberration.

The pitching matchup in Game 5 will be a rematch of Game 1, with Kenta Maeda starting for the Dodgers against Chicago’s Jon Lester. Maeda has not had a strong postseason. Over two starts, he’s allowed seven runs in seven innings of work. He lasted just four innings in Game 1, giving up three runs and hurting himself with three walks. He should feel more comfortable pitching at home and should be more familiar with Chicago’s lineup, but that doesn’t guarantee he’ll be more successful than in Game 1.

Meanwhile, Lester has been outstanding in his first two postseason starts, posting a 0.64 ERA over 14 innings of work. His strikeout rate is a little down from the regular season, but other than the home run he surrendered to Andre Ethier in Game 1, he’s been close to perfect during the playoffs, and there’s little reason to expect that to change in Game 5.

Let’s not mince words, Maeda is the biggest X-factor in Game 5, and his performance Thursday night could very well decide the series. If Maeda can deliver a strong performance and help the Dodgers take Game 5, it would force the Cubs to beat both Clayton Kershaw and Rich Hill on back-to-back nights after those two lefties dominated in Games 2 and 3. That’s not a position the Cubs want to be in, even at home.

However, if Maeda struggles, the Dodgers face an uphill battle facing Lester, and then would likely have to win both Games 6 and 7 in Chicago to take the series. In that scenario, the Dodgers, even with Kershaw and Hill starting, would be in a difficult spot, hoping for some crazy, curse-related event to unfold that prevents the Cubs from reaching the postseason. That is why they need Maeda to be at his absolute best Thursday night; the series could depend on it.

With Lester facing Maeda, the Cubs are obvious betting favorites in Game 5, even on the road. Chicago’s lineup continuing to light up the scoreboard isn’t a guarantee, but at the same time, it’s been more than a month since Maeda had a truly impressive performance. Meanwhile, there’s a strong chance that Lester will pitch another great game and help the Cubs re-take the series lead. Chicago wins 3-1.