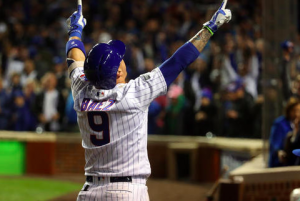 Outside of the National League wild card game, Game 1 of the NLDS between the Chicago Cubs and San Francisco Giants was the first true pitchers duel of the postseason. However, this time the Giants were on the short end of a game that was scoreless until the late innings, as Javier Baez played hero for the heavily favored Cubs, saving Chicago from potentially going down 1-0 in the series.

Seeing how things played out and the pitching matchups on tap for the rest of the series, the Giants absolutely had to win Game 1. San Francisco found ways to get the leadoff hitter on base in the early innings, but failed to capitalize on those opportunities while Johnny Cueto pitched a gem against a dynamic Chicago lineup. Of course, Jon Lester also pitched well, matching Cueto inning after inning, but the Giants had more opportunities to scratch out a run or two early in the game, and their inability to do so has changed the entire shape of the series.

A win in Game 1 could have given the Giants momentum and had Cubs fans thinking that their opportunity to win a World Series was already slipping away. San Francisco would have then needed two more wins knowing that Madison Bumgarner will start a game and Cueto will likely come back in Game 5. However, with a win in Game 1, the Cubs are in complete control of the series.

Game 2 will see the Cubs send Cy Young favorite Kyle Hendricks to the mound. Hendricks started two games in last year’s postseason and failed to complete five innings in each game, posting an ERA of 5.19. However, Hendricks is a different pitcher than he was a year ago, and enters the playoffs with a world of confidence. In a start against the Giants in May, Hendricks allowed one run on three hits over 5.1 innings, and despite taking the loss in that game, he knows he can contain San Francisco’s lineup.

Meanwhile, the Giants will start Jeff Samardzija in Game 2. Samardzija began his career with the Cubs, so he’s well accustomed to pitching at Wrigley Field, which should work to his advantage. Despite an up and down season, Samardzija was at his best in August and September, so he makes his first postseason start pitching at a high level and pitching with confidence. However, he lasted just four innings against the Cubs in a start on September 1, so he knows how difficult it can be to face Chicago’s lineup.

The lineup changes San Francisco makes from Game 1 to Game 2 could help make a difference. Both Denard Span and Joe Panik were held out of the Game 1 lineup against the left-handed Lester, but both should be back in Game 2. With their best lineup on the field against a pitcher who likes to pitch to contact, this could be the best chance the Giants have in this series to put runs on the board. If not, they could find themselves in deep trouble before the series shifts back to San Francisco.

Cueto did a great job of stifling Chicago’s lineup in Game 1, but part of that could be due to the long layoff since the end of the regular season. Samardzija may not be as effective against the Cubs, who figure to pick up where Baez left off Friday night. The Giants will also get a few hits against Hendricks, but it won’t be enough to tie the series. Chicago wins 7-3.