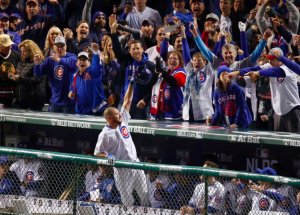 The Chicago Cubs are one win away from playing in the ALCS in back-to-back years. After a close win in Game 1, the Cubs were most impressive in Game 2, taking complete control of the series. However, the San Francisco Giants are not the kind of team that’s going to roll over and make things easy for the Cubs, especially as the series shifts back to San Francisco and the Giants get the home crowd behind them.

The Cubs have three players who have more than one hit thus far in the NLDS, and two of them are Javier Baez and Willson Contreras, two players who are easy to forget amongst a team full of superstars. Baez delivered the big hit in Game 1, and is 3 for 6 with two runs scored in the series, which could force Joe Maddon to keep him in the lineup in Game 3. Relief pitcher Travis Wood hit the only other home run the Cubs have in the series, as Chicago is getting contributions from all over the place, showing just how deep they are. That depth makes it hard to imagine the Giants being able to come back in the series.

San Francisco’s saving grace could be Madison Bumgarner starting in Game 3. In 97.1 career postseason innings, Bumgarner has a 1.94 ERA, as the 27-year old has already cemented himself as one of the best playoff pitchers of all time. At Wrigley Field in early September, he allowed two runs over six innings, but pitching at home against the Cubs in May, Bumgarner tossed 7.2 scoreless innings, allowing just three hits and two walks, so in addition to being a great postseason pitcher, he has already proven that he can handle a powerful Chicago lineup.

Of course, the Cubs have their own ace who will take the mound in Game 3 in reigning Cy Young winner Jake Arrieta. After pitching a gem in last year’s wild card game, Arrieta struggled in his next two postseason starts, although he was able to tally plenty of strikeouts in both outings. That playoff history aside, he allowed one run on four hits over seven innings against the Giants in May, so he’s capable of shutting down San Francisco’s lineup, although he took the loss against them in early September.

In a heavy weight pitching matchup like Bumgarner vs. Arrieta, defense becomes important and could be the X-factor in Game 3. The Cubs as a whole are a strong defensive team, but they were charged with three errors in Game 2 and may not be able to afford to make similar mistakes in Game 3 when one run may be all Bumgarner needs to deliver a win for the Giants. Meanwhile, the Giants had the fewest errors in the National League this year, so they are should be able to provide Bumgarner with the necessary defensive support, and they will need to play strong defense if they can’t get going offensively.

With Bumgarner on the mound, the Giants have become a slight favorites in Game 3. The Cubs are a great team, but it’s not hard to envision Bumgarner shutting them down and giving the Giants life in the NLDS. As aces do, Bumgarner will step up when his team needs him the most. San Francisco wins 3-1.