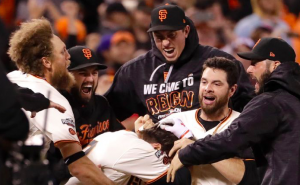 After a thrilling, 13-inning affair in Game 3, the San Francisco Giants are still alive in the NLDS against the heavily favored Chicago Cubs. Of course, the Giants still have their backs against the wall, needing a win in Game 4 to keep their season alive. However, they will be at home and fresh off a confidence-building win in Game 3 in which they displayed the type of scrappiness and perseverance that we’ve come to expect from the Giants.

Help From The Pen?

Of course, the Giants now have to wonder whether their bullpen will be able to duplicate those results in Game 4. Romo, Derek Law, and Ty Blach all pitched two innings in Game 3, so whether those pitchers will be fresh and effective in Game 4 is uncertain, potentially hurting the depth of an already thin bullpen. On the other side, Mike Montgomery gave the Cubs four innings out of the bullpen in Game 3, leaving little doubt that everyone else will be fresh for Game 4, with the possible exception of closer Aroldis Chapman, who threw 21 pitches. Nevertheless, Chicago would appear to have a bullpen advantage heading into Game 4.

Chicago’s rotation depth will allow them to send John Lackey to the mound in Game 4, while the Giants will go with lefty Matt Moore. Lackey has made 23 playoff appearances, including 20 starts, posting a 3.11 ERA in his postseason career, making him an ideal choice to start Game 4. Lackey came on strong the last two months of the regular season, including a start against the Giants in which he gave up just one hit over five innings, so there’s no doubt the Cubs will be in good hands Tuesday night.

Meanwhile, Moore will be making the third playoff start of his career. A playoff start in 2011 went well, as he tossed seven shutout innings, but two years later in his next postseason start, Moore gave up eight runs over 4.1 innings, so how he fares in Game 4 is anybody’s guess. He did not face the Cubs this season, but he could pose a problem for some of Chicago’s left-handed hitters like Jason Heyward and Anthony Rizzo. Also, during his time with the Giants this year, Moore was much better at home, which bodes well for his start in Game 4.

Believe it or not, the Cubs have struggled offensively in this series outside of Javier Baez and Kris Bryant, who have carried Chicago’s lineup, with a little help from Travis Wood and Jake Arrieta, who have both homered. In Game 4, Chicago’s lineup outside of Baez and Bryant will be the biggest X-factor. If the rest of the lineup can wake up and not force the Cubs to rely on Baez, Bryant, and their pitching staff to provide all the offense, Chicago should be able to close out the series. The Giants have received small contributions up and down their lineup, but if the Cubs starting clicking on all cylinders, they won’t be able to keep up.

With a little momentum and the home fans on their side, the Giants will find a way to squeak out another unlikely win in Game 4 and send the series back to Chicago. Moore will pitch well, and the Giants will put balls in play against Lackey, finding ways to manufacture enough runs to win Game 4. San Francisco wins 4-3.