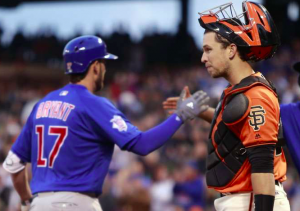 After what can only be described as a dominating one-man show Wednesday night in New York by Madison Bumgarner, the San Francisco Giants have advanced to the NLDS to meet the Chicago Cubs, who were the best team in baseball during the regular season. Most are expecting the Cubs to win this series and ultimately reach the World Series, but is there any chance of this series not going according to script?

Only the Red Sox and Rockies scored more runs than the Cubs this year, as Chicago’s lineup is one of the scariest in baseball for opposing pitchers. Kris Bryant and Anthony Rizzo are both legitimate MVP candidates and are poised to do a lot of damage in the postseason. Ben Zobrist and Dexter Fowler have also been consistent contributors all season, while Addison Russell, Jorge Soler, Javier Baez, and Willson Contreras provide additional pop, giving the Cubs a lineup that is deep and loaded with power, even beyond Bryant and Rizzo.

The Giants have plenty of quality hitters in their own right, most notably Brandon Belt, Hunter Pence, and Buster Posey. San Francisco will have trouble out-slugging the Cubs in terms of hitting for power, but as a team they had the fewest strikeouts in the National League. This means the Giants have a good two-strike approach, making them a team that can keep the line moving and pick up two-out RBIs. But while San Francisco may be able to play small-ball to score some runs in this series, the Giants are definitely not on the same level as the Cubs offensively.

In addition to a stacked lineup, the Cubs have a deep rotation that matches up favorably with San Francisco’s rotation. Playoff veteran Jon Lester will start Game 1 of the series, and he’ll be followed in Game 2 by Cy Young favorite Kyle Hendricks. Last year’s Cy Young winner Jake Arrieta is lined up for Game 3, while John Lackey will make the 21st postseason start of his career in Game 4. That is serious depth that few teams in baseball are able to match.

Of course, the presence of Bumgarner always gives the Giants a chance, as he is arguably the best playoff pitcher of his generation. Unfortunately for San Francisco, with Bumgarner pitching against the Mets in the wild card game, he’ll only be available to start one game against the Cubs. Johnny Cueto will start Game 1, and possibly Game 5, and he will certainly give the Giants every opportunity to win those games after the season he’s had and the way he pitched in the World Series last year. However, what the Giants get out of Matt Moore and Jeff Samadzija could determine their playoff fate, as both will likely get starts against Chicago’s potent lineup and could struggle to contain the Cubs.

The bullpen has been an issue for the Giants for much of the season, as Santiago Casilla lost his job as the closer late in the year. Sergio Romo, who has a good postseason track record, will likely be asked to close out games in the playoffs. Even if Romo is fine back in the closer’s role, the pecking order manager Bruce Bochy will use in the bullpen is a little unclear, which may not bode well for the Giants.

Meanwhile, the Cubs added one of the best closers in the game to an already strong bullpen midway through the season. Aroldis Chapman posted an ERA of 1.01 after being traded to Chicago, so he figures to be close to automatic in the 9th inning during the postseason. The likes of Hector Rondon, Travis Wood, and Pedro Strop provide the Cubs with plenty of depth in front of Chapman.

On paper, this series appears to be rather lopsided in Chicago’s favor, but it has a chance to go five games. The Giants are a scrappy team, a confident team, and a team with experience winning in October, and those kinds of intangibles can go a long way. It’s also important to keep in mind Chicago’s history with curses and unfortunate events in October. If the Cubs lose Game 1 at home, Chicago could quickly turn into Panic City, swinging momentum in favor of the Giants. Of course, at the end of the day, the Cubs have too much talent to pick against them, and they will ultimately survive and advance to the NLCS for a second straight year.