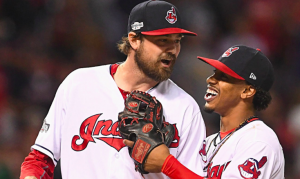 Game 1 of the 2016 World Series featured a couple of predicable heroes for the Cleveland Indians in Corey Kluber and Andrew Miller, who were both outstanding on the mound, as well as one unforeseen hero in Roberto Perez, who launched two home runs to give the Indians a comfortable win over the Chicago Cubs. The pressure now shifts slightly to the Cubs, who do not want to return home down 2-0 in the series, making Game 2 of the utmost importance for them.

The fact that the Cubs were shutout in Game 1 is somewhat misleading, as they were not exactly dominated as much as one would think, especially considering the fact that they struck out 15 times. The Cubs actually had several scoring opportunities against both Kluber and Miller, but they were unable to come up with a big hit and score any runs. Chicago hitters left 20 runners on base, a stat that best exemplifies the team’s missed opportunities. The Cubs need to do better in Game 2, and if nothing else, they have to put the ball in play and avoid striking out at such a high rate. However, they should once again expect a steady diet of breaking pitches, which has been an issue for them throughout the playoffs.

Game 2 will feature Trevor Bauer for the Indians facing Jake Arrieta of the Cubs. The Indians wouldn’t put Bauer on the mound if they thought there’d be a repeat of Game 3 of the ALCS with his injured finger, so one would have to assume the righty is good to go. Of course, in his first postseason start, Bauer failed to last five innings against the Boston Red Sox, so he’s definitely a step down from what the Cubs faced with Kluber in Game 1. In a small sample size, Chicago’s hitters are 5 for 29 against Bauer in their career, although that doesn’t mean he’ll be able to shut down a lineup that was able to put together decent at bats in Game 1, despite being shut out.

Arrieta has also been far from perfect in the postseason, allowing six runs in 11 innings of work across two starts. For the most part he’s been fine, but he always seems to run into trouble at one point or another. The Cubs shouldn’t necessarily expect to get six or seven shutout innings from him, but there’s every chance that Arrieta will at least give the Cubs a chance to win if they can score some runs.

The X-factor in Game 2 will be the home run, as both Bauer and Arrieta have given up a pair of long balls in the postseason, so both should be considered susceptible to it. Both teams have hit plenty of home runs during the postseason, which is somewhat surprising from Cleveland’s perspective, as the Indians did not rely on the long ball much during the regular season. Either way, both teams have won this postseason by hitting home runs, often getting them from unexpected sources. In Game 1 it was Perez with two home runs, and if an unexpected hero comes through with a home run in Game 2, it could be the difference.

The Cubs remain road favorites in Game 2, with Arrieta being favored over Bauer and his bloody pinky. Another big question for Game 2 is the availability of Andrew Miller after he threw 46 pitches in Game 2. If Bauer can’t go deep into the game, the Indians may have to rely on their middle relievers for a couple innings, and that swings the pendulum in Chicago’s favor. Cubs win 6-4.