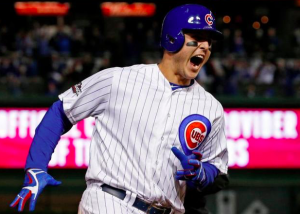 Well, it’s finally here: the first World Series game at Wrigley Field in more than seven decades. The crowd is bound to be electric, especially after the Cubs were able to even up the series with a 5-1 win in Game 2. With the series tied at 1 game apiece, Game 3 now becomes pivotal for both teams, as the Cubs are hoping to capitalize on their home field advantage, while the Indians are hoping to steal at least one game in Chicago in hopes of forcing the series back to Cleveland after a weekend at Wrigley.

One way to describe Chicago’s offense during the postseason is Jekyll and Hyde. At times, the Cubs have looked like the force of nature they were during the regular season, but other times they have been utterly dominated and look very much like a young team that’s still finding their way. The Cubs have actually been shut out in three of their last seven games, which is hard to believe, even against the elite pitching teams see in the playoffs. Of course, in their four other games, Chicago’s lineup is averaging seven runs per game. It’s either been all or nothing for the Cubs lately, so what team we’ll see at Wrigley in Game 3 and beyond remains to be seen.

Game 3 will feature Kyle Hendricks of the Cubs starting against Josh Tomlin of the Indians. Hendricks is coming off a brilliant start against the Dodgers in the NLCS, allowing just two hits over 7.1 shutout innings. Of course, the Indians are a new challenge for Hendricks, particularly the trio of Francisco Lindor, Mike Napoli, and Jose Ramirez, who make up the heart of Cleveland’s batting order and have been their most productive hitters over the first two games in the series. Of course, outside of Coco Crisp, Hendricks has never faced any of Cleveland’s hitters, so it should be an interesting matchup.

Meanwhile, Tomlin has also impressed during the postseason, posting a 2.53 ERA over two starts. He’s had close to two weeks since his last start, so Tomlin should be fresh and ready to go Friday night. Of course, since Tomlin will be brought back to start Game 6 on short rest, the Indians may not rely on him to go too deep into the game, especially if they have a lead and can turn the things over to Andrew Miller and Cody Allen. Tomlin has limited experience against Chicago’s hitters, although Ben Zobrist is just 2 for 19 in his career against Tomlin, which could be important, as Zobrist is off to a hot start in the World Series and the Indians would love to cool him down.

Indians second baseman Jason Kipnis will be the X-factor in Game 3. Kipnis is a native of Chicago and grew up a Cubs fan, so playing a World Series game at Wrigley Field will be a meaningful experience for him, and he’ll want to make his presence known. More importantly, the Indians need Kipnis to start producing. He was one of the team’s most reliable hitters during the regular season, but he’s hitting just .154 during the postseason. Despite getting a couple home runs out of him during the playoffs, the Indians need more out of Kipnis if they hope to win a game or two in Wrigley Field.

Coming home after an impressive win in Game 2, the Cubs are obvious betting favorites in Game 3. With so much energy in the building, it’s hard to imagine the Cubs not finding a way to win. Tomlin will pitch well and keep the Indians in the game, but Hendricks will be a little better. Cubs win 3-1.