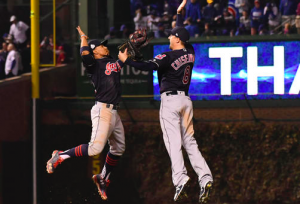 Well, the Cleveland Indians spoiled the party. The Chicago Cubs were finally able to host a World Series game at Wrigley Field for the first time in more than 70 years, but the Indians put together another dominating pitching performance. Four pitchers combined on a shutout that limited the Cubs to just five hits, giving Cleveland a 1-0 win and a 2-1 series lead. The Cubs must find a way to rebound in Game 4 and tie up the series before thoughts of never-ending curses start creeping into the back of their heads.

Lights out is one way to describe Cleveland’s pitching during the World Series, and throughout the entire postseason. The Cubs have now been shut out twice in three World Series games and four times during the playoffs. Even with a five-run performance in Game 2, outside of Ben Zobrist and Kyle Schwarber, who can only pinch hit while the series is at Wrigley, the Cubs haven’t gotten consistent production out of anybody. The likes of Javier Baez, Kris Bryant, and Dexter Fowler have all struck out five times in three games, indicating how they’ve been dominated by Cleveland’s pitchers. The Cubs have also failed to hit a home run in three games, which is unusual.

Obviously, the Indians deserve a great deal of credit for the way they’ve pitched, but with a somewhat depleted staff, one would think the Cubs would have more success. The constant stopping and starting of Chicago’s lineup has also been surprising to see, as the Cubs have looked quite potent offensively in some games, but have failed to sustain that success in consecutive games.

For the Indians, Corey Kluber starts Game 4 on three days of rest, opposed by John Lackey, who should be well rested, making his third start of this year’s playoffs. Kluber was outstanding in Game 1, striking out nine and limiting the Cubs to just four hits over six-plus innings. Between a nasty curveball and a running fastball that had left-handed hitters frozen, the Cubs had little chance against him. The game he started in the ALCS on short rest was the only game this postseason in which he allowed any runs, so whether he can be at his best in Game 4 remains to be seen. Nevertheless, he should have plenty of confidence, as Chicago’s hitters will not be happy to be facing Kluber again so soon.

Meanwhile, Lackey comes in fresh with 10 days of rest, although his performance has been modest this postseason. Joe Maddon hasn’t had a ton of trust in him, pulling Lackey after four innings in each of his two starts. In eight innings during the playoffs, Lackey has surrendered five runs on 10 hits and five walks, which is less than ideal for a team now trailing in the series. Among current Indians hitters, only Rajai Davis has had much success against Lackey, going 12 for 35 with four extra-base hits. Coco Crisp has two career home runs against him, albeit with a .139 average, while Mike Napoli and Carlos Santana have also homered against Lackey, although no one in their lineup outside of Davis has hit for a high average against him.

Middle relievers figure to play a big role in Game 4. Kluber’s stamina is questionable on short rest, especially since the Indians will bring him back again on short rest in Game 7. Meanwhile, Lackey has been pulled after four innings in his first two postseason starts, and so the Cubs may need five innings out of their bullpen. We know both bullpens have guys at the back end who can close out games, but which team can get to those guys could determine Game 4. Both teams have had mixed results out of the middle of their bullpen, so little is guaranteed if the starters can’t go deep into the game.

On paper, Game 4 is a virtual toss up. Kluber is a better starting pitcher than Lackey, but will that remain the case on short rest? The Cubs have been shut out four times during the playoffs, but when they haven’t been shutout, they’ve had no trouble scoring runs, so which lineup shows up? At what point will Wrigley Field create a home field advantage, or will bad thoughts start lingering into Chicago’s head? Ultimately, Kluber will deliver a better performance than Lackey, and the Indians will add a few more runs against Chicago’s bullpen and prevail. Cleveland wins 6-3.