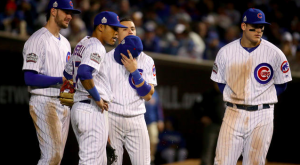 If you said before the World Series that one team would have a chance to clinch a world championship at Wrigley Field in Game 5, most people would have guessed that team would be the Chicago Cubs. Alas, the Cubs have dropped two games at Wrigley, putting the Cleveland Indians just one win away from winning their first World Series since 1948. In a rather surprising role reversal, it’s the Cubs who are hoping to win a game in order to force the series back to Cleveland, as Game 5 is officially a must-win for the home team.

Through four games, the Indians have simply been better in most aspects of the game than the Cubs. The Indians have looked more like a National League team than the Cubs, as they’ve shown the ability to play small ball. Cleveland has made productive outs, moved runners over, and put the ball in play, forcing the Cubs to play defense. Meanwhile, the Cubs have struggled just to put the ball in play at times, as everyone is swinging for the fences instead of trying to sustain a rally by stringing together hits. That strategy has made Chicago’s hitters particularly susceptible to the steady diet of breaking balls Cleveland’s pitchers have given them.

At the same time, the Indians have also been better at hitting the long ball than the Cubs, to the surprise of many. The Cubs didn’t hit their first home run of the series until the late innings of Game 4 when they were already trailing 7-1, whereas the Indians have four home runs in four games. If Chicago isn’t going to make more of an effort to change its approach and get base hits, then the Cubs will continue to live and die by the home run, which has not worked out for them thus far in the World Series.

In their hour of need, the Cubs will turn to Jon Lester, who has been their ace this postseason. Of course, Lester did not fare well in Game 1 of the series, giving up three runs in 5.2 innings. The Cubs will have confidence in Lester to perform better in an elimination game, but Cleveland’s hitters will feel good about their chances to put a few runs on the board against Lester.

The Indians will counter with Trevor Bauer, who has been the weak link in Cleveland’s rotation this postseason. Bauer was pulled after 87 pitches in Game 2, so he should be fine to pitch again on short rest, but in just 3.2 innings against the Cubs, he let up two runs on six hits. He’ll have to be much better in Game 5 if the Indians are going to close out the series. If Bauer struggles early, don’t be surprised if Terry Francona is quick to pull him in favor of Ryan Merritt or Danny Salazar.

Wrigley Field may be the biggest X-factor in Game 5 if the Cubs are going to stay alive and get the series back to Cleveland. The stadium was quite raucous before Game 3, but fans haven’t had much reason to cheer outside of a brief lead in the 1st inning of Game 4. At this point, there has to be doubt creeping into the minds of fans, and that may start creeping into the psyche of the players. At the same time, if the Cubs can take an early lead in Game 5 and get the crowd into the game, it could help give the Cubs some momentum in the series that they can take back to Cleveland.

Despite being down in the series and facing elimination, the Cubs remain betting favorites in Game 5. Of course, needing just one win in the next three games, the Indians have to be series favorites at this point. Nevertheless, the Cubs should be able to avoid being eliminated on their home field. Bauer has not been effective enough in the postseason to think that he’ll give the Indians the kind of performance they’ll need to close out the series, while Lester is still a safe bet to have a good game and keep his team alive. Cubs win 5-2.