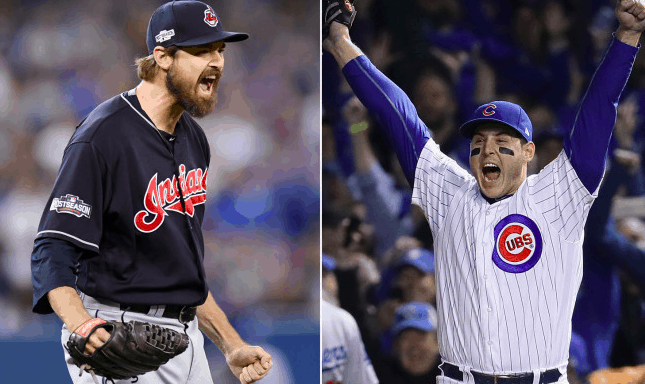 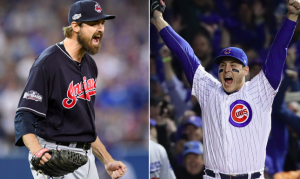 Well, it all comes down to this: Game 7 of the 2016 World Series. The Chicago Cubs have managed to win the past two games while on the brink of elimination, evening their series with the Cleveland Indians and forcing a winner-take-all Game 7 Wednesday night in Cleveland. The Cubs have been favored all along, so it shouldn’t come as a surprise that they’ve been able to come back to tie the series after falling behind 3-1. Of course, everything that happened in the past six games is virtually meaningless; the only thing that matters now is what team comes out on top in Game 7.

It took a while, but the potent lineup everyone expected to see from the Cubs has finally arrived. Chicago scored nine runs on 13 hits in Game 6, as the Cubs are finally starting to live up to their offensive potential during the postseason. Joe Maddon made a few tweaks to the lineup, and now the 3-4-5 part of the order of Kris Bryant, Anthony Rizzo, and Ben Zobrist appears to be clicking on all cylinders. Addison Russell in the 6-hole also appears to have awoken after being in a slumber for most of the playoffs. Meanwhile, Kyle Schwarber, now hitting second, continues to be an X-factor. Chicago’s offense may have woken up just in time for the Cubs to slug their way to a World Series championship.

After Josh Tomlin’s start in Game 6, it appears the lack of depth in Cleveland’s rotation is starting to become a factor. Nevertheless, the Indians will start Corey Kluber on short rest for the second time this series in Game 7. Kluber has been nothing short of spectacular during the playoffs, posting a 0.89 ERA over 30.1 innings of work, but a second consecutive start on short rest does add an element of uncertainty. Kluber allowed just one run over six innings in Game 4 on short rest, and the Indians would love a similar performance. If Kluber can give the Indians four or five innings and prevent the Cubs from taking an early lead, they’ll be satisfied.

The Cubs, meanwhile, will send likely Cy Young winner Kyle Hendricks to the mound for Game 7. Hendricks has a 1.31 ERA during the postseason, but he hasn’t always gone deep into games, lasting just 4.2 innings in Game 3, allowing six hits and two walks despite not giving up a run. The Cubs may need Hendricks to go deep into Game 7, but he also needs to put up 0’s, so Maddon may not hesitate to give him an early hook if the Indians continue to get hits against him.

The freshness of each bullpen may become an important factor in Game 7. The Indians needed 6.1 innings out of their bullpen in Game 6, but they did so without using Cody Allen, Andrew Miller, or Bryan Shaw, meaning all three will be fresh and ready to go. Each could conceivably pitch two innings in Game 7, possibly more with Miller and Allen, who have been utterly dominant throughout the playoffs. This should take a lot less pressure off Kluber, as the Indians may be able to get away if he only goes four or five innings before tiring.

On the other side, the Cubs have used all of their best relievers the last two games in order to force a Game 7, and so Chicago’s bullpen may be a little tired. Aroldis Chapman in particular could be tired after the last two games, so whether the Cubs can get more than three outs from him in Game 7 is questionable. Maddon will look to get as much as he can out of Chapman, but if he falters, where will the Cubs turn? Fortunately for the Cubs, both Jon Lester and John Lackey should be available out of the bullpen, giving them a little more depth if they need it.

After winning the last two games to force a Game 7, the Cubs remain favorites to win the decisive game. However, even though the Cubs have started to come alive offensively, they haven’t been able to figure out Kluber all series. If Kluber can just shut down the Cubs for a few more innings, he can turn things over to Miller and Allen to finish the job. The bullpen will be the difference, and with Chapman being taxed over the last two games and the Indians being fresh, Cleveland will have the edge in the late innings of Game 7, helping them to close out a win and a world championship. Cleveland wins 4-2.