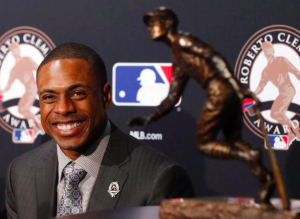 New York Mets’ outfielder Curtis Granderson was given one of baseball’s greatest honors Friday before Game 3 of the World Series. MLB commissioner Rob Manfred presented Granderson with the prestigious Robert Clement Award, which is given annually to the player who “best exemplifies the game of baseball, sportsmanship, community involvement and the individual’s contribution to his team.” The award is a great honor for any player, and Granderson is a more than worthy recipient, known as one of the most well liked and charitable players in baseball.

“Curtis Granderson is an outstanding ambassador for our game and a positive role model for kids,” said Manfred. “His commitment to the many communities that have touched his life and the great impact of these efforts makes him a very deserving recipient of our most prestigious award. On behalf of Major League Baseball and all of our clubs, I congratulate Curtis and thank him and all of our nominees this year for everything they do to make a difference in the lives of others.”

Grandson’s charitable endeavors include a $5 million donation to his alma mater, the University of Illinois at Chicago, for an indoor/outdoor baseball complex. The facility opened in 2014 and is also used as an Urban Youth Academy, providing a safe environment for nearly 10,000 inner-city kids to play baseball year round.

The 13-year veteran and three-time all-star also hosts clinics each year in Chicago, New York, and Florida, teaching kids baseball, as well as leadership skills. He has also acted as the Mets’ spokesperson on several initiatives, and has helped raise money for several New York charities. He’s also been known to bring kids to watch Mets games at Citi Field, and can often be seen chatting pleasantly with fans while eon the on-deck circle.

Upon receiving the award, Granderson gave a great amount of credit to his parents for instilling the right values in him. “I remember seeing my mom and dad inviting people over to have food, have drinks,” he recalled. “Taking clothes that I had outgrown and passing them on to students that were my size that needed stuff I had outgrown. Giving my teammates when they didn’t have rides to and from. At that time, I didn’t think of it as, ‘This is their way of giving back,’ but that’s what they had been doing. They had been doing it my whole life. I got a chance to witness it and experience it early on in my lifetime.”

Granderson also enjoyed being able to receive the award in his home town of Chicago. “It’s really cool to get a chance to be here with my mom and dad, who made me who I am today,” he said. “Chicago’s always been home. Though I’ve played for teams outside of Chicago, but this is what helped me to get me where I am today.”

Of course, Granderson did not accept the award without praising its namesake and the influence Clemente had on the world. “What Roberto Clemente stood for, his family is living proof of what it was to not only be a professional athlete, but professional human being,” Granderson said. “The importance of knowing that his community is what made him who he was, and the reason why he was able to be where he was, and he never forgot that, whether his community was in Pittsburgh, where he played, or his hometown where he was able to go back to in the offseason, or during the season to help out at any time no matter what was going on.”

On the field this season, Granderson hit .237 with 30 home runs. He even spent some playing center field at age 35. Perhaps most impressively, he joins a list that includes Willie Mays, Rod Carew, Gary Carter, Ozzie Smith, Tony Gwynn, Derek Jeter, and last year’s winner Andrew McCutchen, as recipient’s of the Roberto Clemente Award.