D Stands For ‘Danger’ or ‘Doh!’ In Dallas–Not Defense 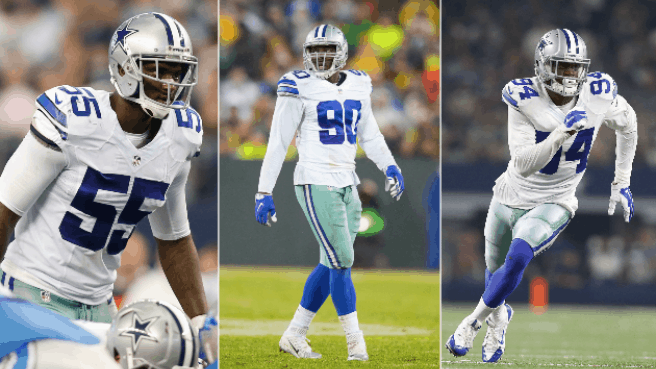 Everyone deserves a second chance. Just because you make one stupid mistake does not mean you should be fired, blackballed, or not allowed to do something ever again. It does mean fewer people are going to trust you just to do your job and not mess up again so if you get that chance you should do everything in your power not to mess it up.

The Dallas Cowboys have been known to give guys a chance. They certainly did when they traded for Rolando McClain and drafted Randy Gregory, but it appears that neither player learned anything from the mistakes that threatened their careers.

Rolando McClain’s career was over after getting cut by the Oakland Raiders. The Baltimore Ravens were open to giving him another chance, but he opted to retire instead. Then the Dallas Cowboys swooped in, gave him a shot, and it looked like the smartest deal Jerry Jones has ever made. That is until McClain was suspended for four games for substance abuse to start the 2015 season.

But surely he would learn from his mistake and not do it again. Most people would–but he didn’t. He was busted again and is now out for the first ten games of the 2016 season.

At least he’ll have someone to hang out with, though. Randy Gregory has been suspended for the first four games of the season for violating the substance-abuse policy. You would think he would have learned a lesson when he tested positive at the Combine and fell out of the first round–but apparently not.

If that wasn’t enough to give Dallas Cowboys defensive coordinator, Rod Marinelli, nightmares, he is going to have to figure out how to replace Demarcus Lawrence for the first four games of the season as well. He was hopeful his four-game suspension for amphetamine use could be reduced or lifted, but his appeal was denied.

So a unit that ranked 17th in overall defense, 5th against the pass, 22nd against the run, and 16th in points allowed is going to be without three of its starters when the 2016 season starts. They will be hard pressed to maintain the numbers that earned those ranks let alone improve their league-worst 11 total turnovers.

Defensive back Brandon Carr knows his unit is going to be tested with some of its best playmakers out and did his best to rally the troops during a recent radio appearance:

“Well, anytime you get a guy going down in your unit, you have to come together even stronger to make up for that slack,” Carr said. “… football’s a game of the next man up, it’s a game of inches. So it’s going to take for all of us to come to training camp focused and next man up, get him ready, get prepared to go out there to battle.”

Luckily, the Cowboys do not play any especially tough teams in their first four games. The New York Giant (Week One) have not had much of a running game in years, and the Washingon Redskins are going to be hoping Kirk Cousins and Matt Jones are half as good as they think. Chicago could be tough, but you never know what you will get with Jay Cutler and Jeremy Langford is young and inexperienced. San Francisco will likely run Carlos Hyde until he pukes, but at least the Cowboys will know he’s coming since the 49ers will have Blaine Gabbert at quarterback.

If the Cowboys are lucky their third round (Maliek Collins, Nebraska) and fourth round (Charles Tapper, Oklahoma) picks will be able to step up and fill the void on the defensive line from Day One, but if you count on rookies–well, that usually means you are in trouble.

The defense is definitely in danger of being under-manned when the season starts, and the decision makers may be feeling a little like Homer Simpson for taking chances on so many guys. To make up for their defensive shortcomings, it is not uncommon for a basketball team to simply try to outscore the competition. It looks like the Dallas Cowboys may be forced to run with a similar strategy.