Fans of the Dallas Cowboys walked away from their television sets last week thinking that this season was going to be just like the last—the team plays three-quarters of pretty good football only to let the game slip away in the end. 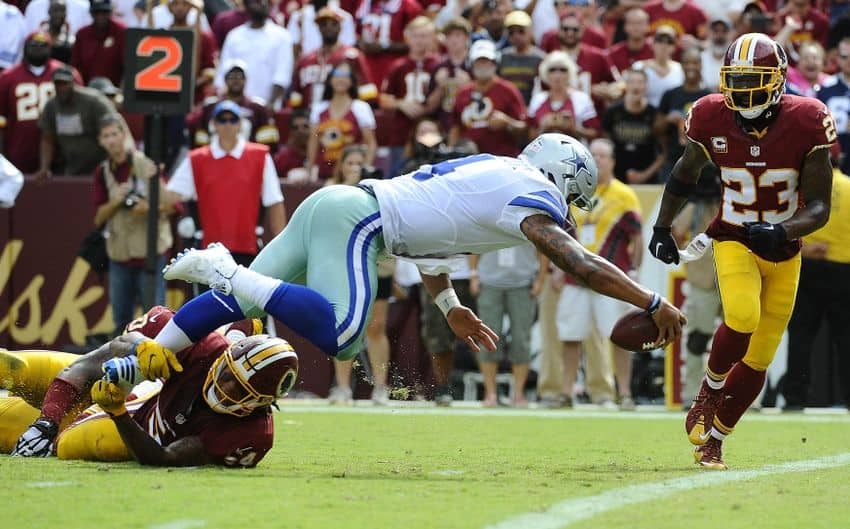 The Cowboys got out to an early 10-0 lead but ended up being ahead 13-10 at halftime. Washington took the lead with a touchdown drive to start the second half, but Dallas followed up with one of their own. The Redskins ended up taking a 23-20 lead after a fumble by Ezekiel Elliot set Washington up with a short field.

After a three and out on their first drive of the fourth quarter, it looked like it was going to be more of the same for Dallas fans. Another good fight wasted with a poor effort to finish the game that ends with another loss—but then the craziest thing happened.

On third and goal from the six-yard line, Kirk Cousins threw an interception to Barry Church in the end zone.

But for it to matter, Dak Prescott had to take the team on a game-saving, fourth quarter drive—and he did. Not without a little more drama, though. With the ball on the 23-yard line—well within Dan Bailey’s field goal range—Ezekiel Elliot fumbled the ball for the second time during the game.

“It really doesn’t matter what I did,” Elliott said after the game (Fort Worth Star-Telegram). “I had those two fumbles, and that’s what was important.”

This time, fate was on Dallas’s side, and Doug Free recovered the ball. Four plays later, former Washington Redskins running back Alfred Morris scored from four-yards out to give the Cowboys the lead, 27-23.

For some odd reason, even though the Redskins had to have watched the film of last week’s Giants-Cowboys game where New York’s running game gashed the Dallas defense, Washington tried to pass their way down the field in an effort to salvage a win—but they failed.

After playing a good, but incomplete game last week, Dak Prescott received rave reviews for his play this week. Jerry Jones was one of the many who gave Prescott his stamp of approval after the game:

“You have a rookie quarterback in this situation (and) it also puts a lot of expectations on him when you think about it. We expect to go out there and move that ball and make plays, and he’s doing that. He’s not turning the ball over, and he’s also, in his way, making contributions….”

Jones was quick to point out the team would be even better if Tony Romo was healthy and gave a lot of credit to Ezekiel Elliot as well:

“If Tony had been there from the get-go this thing would be simple,” Jones said. “Bottom line is [Ezekiel] Elliott is impacting the defense, which says everything right there. They know it, and we know of it. They’re stacking it to stop him.”

Prescott fans shouldn’t be too worried that their guy’s time is running short even though Romo was seen throwing on the sideline before kickoff. With how Jones is talking, it would not be shocking to see Romo rushed back too soon and injured again in his first game back—just like last year.