Fans of the Dallas Cowboys have been a little concerned about their team. With Tony Romo’s injury history and the way the team imploded after he went down last year, there has been a lot of concern over who the No. 2 man would be. Kellen Moore was that guy even though he was unimpressive last season, but then he had to go and break his leg in practice. After saying he learned his lesson from trying to be cute last season, surely Jerry Jones would bring in a veteran to be the No. 2 man.

But no. Instead, Jones says he wants to give rookie Dak Prescott and second-year man Jameil Showers a shot at the job first; a rookie and a guy that spent the season on the practice team last year. They’ve earned it, he says (PFT). 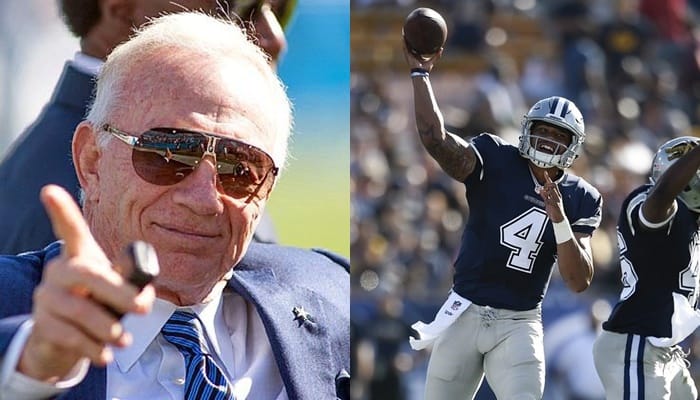 Really, Jerry? Didn’t you learn anything from last year, man?

“We’ve seen enough from them that they deserve this opportunity,” Jones said on ESPN 103.3, via the team’s website. “We’re going to see that, and so I don’t see bringing a quarterback in here that has to take reps away from these guys during the preseason. … These young quarterbacks are going to get it, and I’m not going to waste that time. That time is a precious commodity in the NFL to evaluate quarterbacks.”

Fans had to think, “Gee—thanks, Jerry; good to know you take winning seriously and not trying to get cute again. “Trust a rookie and an undrafted guy to keep the team from floundering should Romo go down?

As Chad Johnson would say—child, please!

But then, wouldn’t you know it, the rookie goes out and proves him right in the team’s preseason opener last Saturday.

Against the Rams, Dak Prescott looked like a veteran quarterback behind center rather than a rookie seeing action in the NFL for the first time. He looked poised, calm, and kept the team moving. He wasn’t perfect, of course, but he was pretty darn good (10-12, 139 yards, and two touchdowns).

Based off of the first game of the preseason, it looks like the Cowboys may have a pretty decent backup quarterback. Jerry Jones certainly thinks so:

“He is a long way from Canton, a long way from Canton,” Jones said Monday via The Star-Telegram. “But it was certainly a great start. It was just good to see the coaching staff and everybody get behind the promise of what he might be able to be as a player. Certainly the way he and (Jameill) Showers played, I wouldn’t consider a backup quarterback situation at all. I wouldn’t want to, by any way, deter the progress and the excitement that he can bring to the building of the team and the future.”

As nice as it is for the Cowboys to have an adequate reserve for Tony Romo, Dak Prescott’s best contribution is something else altogether. He got Jerry Jones to stop talking about Johnny Manziel.

Ever since the 2014 Draft, fans have had to listen to Jones talk about how he almost picked Manziel or wished he had. But now it appears that Jerry is more excited to speak of another guy—Dak Prescott. After the game against the Rams, a TMZ crew caught up with him later that night and asked him about Manziel (CBSSports):

TMZ: What is it about Johnny Manziel that you guys don’t want him on the team?

So thank you, Dak Prescott. Thank you for being the one to get Jerry’s mind off of Johnny Football–finally.