Dallas Cowboys Owner Jerry Jones Is 100 Percent Correct (for once)

When you own a professional football team that happens to be worth more than any other sports team in the world, you have earned the right to offer up your opinion on anything related to the game. Dallas Cowboys owner Jerry Jones has never been shy about offering up his opinions no matter how ridiculous they are.

The world usually just brushes them off as the ridiculous statements they are, but that doesn’t stop him from saying them and presenting them to the world as facts. Recently, he was at it again during an appearance on a local radio show in Dallas. But for once, what he said was 100 percent correct. 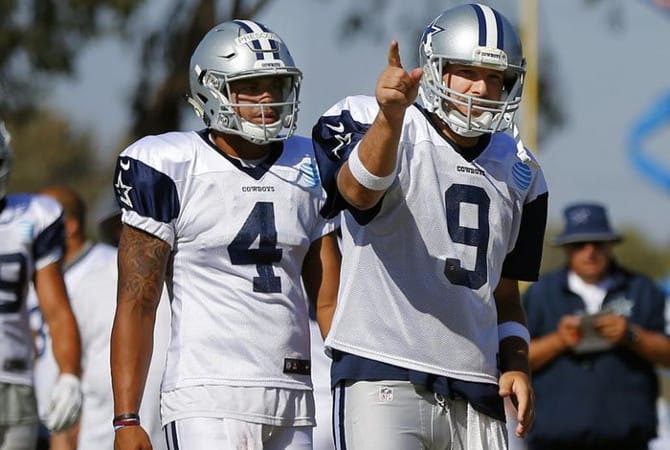 What on Earth could that be? He referred to the developing quarterback dilemma the Cowboys will eventually have to face as a “miracle problem to have.”

Even though Tony Romo has not been able to lead the team to postseason glory, Jerry Jones has committed to him publicly and financially. The Cowboys can’t afford to get rid of him (if they wanted to do so) until the 2019 season at the earliest when his dead cap hit goes from $8.9 million in 2018 to $3.2 million in 2019.

When Romo was out last season, Jones never hesitated to back his high-priced quarterback, but it helped that none of the quarterbacks that took the field in his place were any good. This time, however, that is not the case.

Not only is his replacement—rookie Dak Prescott–playing well, but he has the team clicking on all cylinders and winning games. As a result, Jerry Jones is faced with a dilemma—do you fix what doesn’t appear to be broken and risk ruining a good thing? Or does he leave well enough alone? Put in the veteran quarterback or the new guy?

But if he leaves Prescott in and he leads the team to the NFC Championship—something Romo has never been able to do—what does he do next season? Do you take the rookie out that did more in one season than the other guy has throughout his whole career?

Or do you stick the veteran back in once he’s healthy (this season or next) to see what he can do with the team?

“I think what Dak’s success has done, though, is given us the luxury,” Jones said. “No one is happier about this than Tony. It’s given us the luxury to absolutely maximize any thought that we might have of [Romo’s] rehab time and just have the ability to weigh that as we go and pick our spots.”

This comment makes it sound like Jones is considering doing something smart like leaving Prescott in and not rushing Romo back to the lineup. They rushed him back last season and reinjured his collarbone in his second game back.

At the least, it would make more sense if they had him sit another week and return against the Cleveland Browns rather than return to face a very good Philadelphia Eagle defense. However, it sounds like Jones might consider sticking with Prescott when he said that “we will play this thing out.”

That could mean Romo gets a little more time to heal before playing or that could mean Prescott keeps the job as long as he keeps winning. Or it could mean nothing and Jerry Jones was just giving a non-committal response that lets the reader/listener decided what he means.

Whatever the case may be, the Cowboys will have a tough one when they travel to Green Bay this week, but one they can win with how the offense and defense are currently playing. So there is a very good chance the Cowboys will head into their bye week and the Eagles game on a five-game winning streak.

How in the world can they bench a quarterback with that kind of record—that has yet to throw an interception?