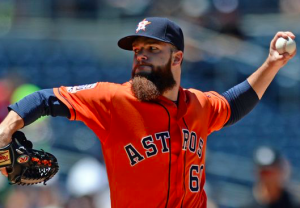 The Houston Astros have shut down starter Dallas Keuchel due to a shoulder injury that will cause him to miss his next two starts, possibly more. Keuchel was scheduled to pitch last Friday, but that start was pushed back to Tuesday. However, on Monday the Astros announced that Keuchel will not start Tuesday and he will not pitch this weekend. Instead, Keuchel is on his way back to Houston to undergo an MRI.

“Dallas flew back to Houston to get further evaluated,” explained Astros manager A.J. Hinch Monday afternoon. “He played catch in Texas (Friday) and didn’t feel great, so he flew back to see our doctors, had some tests. He’s been diagnosed with shoulder inflammation, which we knew. It just hasn’t resolved, and he hasn’t been able to play catch, so we’re going to shut him down for the time being. He won’t make tomorrow’s start. He won’t make his start this weekend, either. We’ll get back to Houston and evaluate what’s next for him, but he went back to Houston.”

The shoulder issue could potentially end the season for last year’s American League Cy Young winner. “We tried to give him some gaps in time and give him some rest period, but that hasn’t solved it,” Hinch said. “He’s going to go see the doctors he needs to see, and until he’s pain free, he’s not throwing. Where we are in the calendar is going to bring the obvious questions, but we just don’t know right now.”

Hinch says that Keuchel is generally good at pitching through general soreness and “irregularities that happen throughout the season,” but the lefty has not been able to pitch through this issue. Keuchel has not had a standout season coming off last year’s Cy Young win, but he’s remained healthy up until now. He also appeared to be finding his groove lately. In four starts in the month of August, Keuchel was 3-1 with a 3.10 ERA.

With Keuchel finally starting to look like his former self, losing at least two starts from him is a major blow to Houston’s playoff hopes. The loss of Keuchel is compounded by the continued absence of Lance McCullers, who has been the team’s ace this season but remains on the DL with an elbow injury. McCullers began a throwing program last week but is not yet ready to return to the Astros.

“It’s a difficult blow in that our rotation is going to need to have guys step up and pitch well and keep us in games,” Hinch said. “It’s never easy, and I think every team this time of year, regardless of whether you’re in it or not, probably has some circumstances they’ve had to overcome. This is going to be ours.”

Brad Peacock will take Keuchel’s start on Tuesday against the Cleveland Indians. Peacock has made five relief appearances for the Astros this year. He’s spent most of the season in triple-A, where he posted a 4.23 ERA working primarily as a starter. Hinch did not commit to Peacock being in the rotation beyond Tuesday’s start, nor did he offer specifics on how the Astros might fill any other vacancies in their starting rotation.

The Astros obviously hope Keuchel can return in short order, but they shouldn’t expect him back for at least a week, depending on what his MRI shows. Meanwhile, Houston has no choice but to continue on without him. The Astros enter play Monday 2.5 games out of the second wild card spot in the American League. A return to the postseason already appears to be a challenging endeavor for the Astros, and possibly doing so without Keuchel will make it that much harder to pull off.