Daniel Murphy Out For Remainder of Regular Season

Posted on September 29, 2016 by Bryan Zarpentine 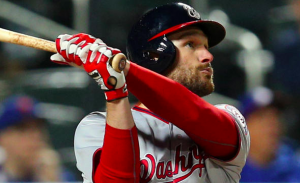 Second baseman Daniel Murphy has not played for the Washington Nationals in over a week due to a strained buttocks, and the team now says it’s unlikely that he’ll be able to return to the field before the end of the regular season. Washington manager Dusty Baker told reporters on Thursday that Murphy’s injury is starting to feel better and that the team remains hopeful that he’ll be ready to play when the postseason begins. By then, Murphy will have gone more than two weeks without an at bat and nearly three weeks without starting a game.

Murphy was last in the starting lineup on September 17, and while he pinch-hit twice in the following days, he hasn’t appeared in a game since September 20. The Nationals have kept off the field since last week when an MRI revealed a muscle strain. There were also reports that Murphy’s injury was not responding to treatment, at least initially, creating some concern for the MVP candidate.

The Nationals, at least right now, believe he’ll be back in time for the postseason. “We’re shooting for him to be ready on the seventh,” said Baker, referring to October 7, when the Nationals open the NLDS against the Los Angeles Dodgers. “He might get a pinch-hit, but I don’t want to take him backwards. We’ll probably have an intra-squad game or something to get him some live pitching.”

Baker says that Murphy has been hitting in the batting cage to stay sharp while he’s been out. The manager adds that because of Murphy’s compact swing, he should be able to find his rhythm at the plate relatively quickly compared to players with longer swings, even if he ends up missing close to three weeks of action.

The absence of Murphy would be easier for the Nationals to deal with if not for the recent loss of catcher Wilson Ramos to a torn ACL and the continued absence of Bryce Harper due to a thumb injury. Harper has not played since Sunday when he hurt his thumb sliding into third base. An MRI on his thumb came back clean, but Baker is not yet comfortable putting Harper back in the lineup.

“If he hits the ball solid, it’s not going to hurt. But if he gets rattled or hits one on the end or gets jammed on one, it’s going to send electric shocks through his body,” Baker explained. “That thumb is so important in the whole equation. Holding the bat. Holding the ball to throw it. Everything. Or if he’d slide again and put it down and re-bruise it. So I just thought that one more day.”

The Nationals have already all but ruled out having Stephen Strasburg in the NLDS, so having their offense at full strength will be of the utmost importance against the Dodgers. Of course, Los Angeles is sending lefties to the mound in Games 1 and 2 in large part to neutralize Murphy and Harper, which is a testament to how important those two players are to Washington’s offense and how badly the Nationals need them to be healthy by the time the postseason gets underway. If either is unavailable or less than 100% during the NLDS, a close matchup on paper could swing in favor of the Dodgers.