Danny Salazar to Miss At Least One Start

Posted on September 10, 2016 by Bryan Zarpentine 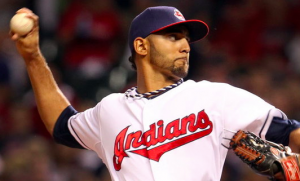 Cleveland Indians starting pitcher Danny Salazar will miss at least one start after being removed from Friday’s start against the Minnesota Twins due to tightness in his forearm. Indians manager Terry Francona told the media before Saturday’s game against the Twins that Salazar will travel home to Cleveland on Sunday to be evaluated by team doctors. Francona added that Salazar will miss at least one start, although his status for the remainder of the season is uncertain at best after a series of arm issues this year.

Salazar lasted just four innings on Friday night, throwing 76 pitches before being removed for what the team called precautionary reasons. The team did not suspect anything was amiss with Salazar until the 4th inning. “The fourth inning, just watching, it was a little weird,” explained pitching coach Mickey Callaway said. “It looked like he was throwing a bar of soap, the way he was releasing the ball. So, I wasn’t shocked when he came in.”

Following Friday’s game, Francona described Salazar’s problem as being muscular, which may be good news compared to the other possibilities when a pitcher complains of arm or elbow pain. However, any issue at this stage in the season should be cause for concern for a team heading to the playoffs, especially for someone like Salazar who has dealt with numerous arm issues this season.

Salazar was exceptional over the first three months of the season, ending the month of June with a 2.22 ERA. But things have not gone as planned for Salazar since then. Around the all-star break, he complained of elbow discomfort, and the Indians ultimately placed Salazar on the DL with elbow inflammation in early August. Salazar returned from the DL after a little more than two weeks, but he’s struggled since then, allowing 15 earned runs in 20 innings over the course of five starts.

The injury to Salazar will put Josh Tomlin back in Cleveland’s rotation after he was recently removed in favor of Mike Clevinger. Of course, even if Salazar misses multiple starts, the Indians should be able to close out the AL Central without him. Cleveland currently leads the Detroit Tigers by six games, with a magic number of 17 to clinch the division heading into Saturday.

However, the Indians were no doubt counting on Salazar to be part of their postseason rotation. Cleveland is not only hoping that Salazar can come back healthy before the end of the regular season, but also return to the form he had early in the season. The Indians have three other starters they’re comfortable sending to the mound in the postseason in Corey Kluber, Carlos Carrasco, and Trevor Bauer, but there’s no clear option for a fourth postseason starter if Salazar isn’t available.

It’s too early to say with any certainty how long Salazar will be out, but his continued arm trouble over the past few months, as well as his struggles on the mound since returning from the DL last month, indicate he may need to miss more than one start. The Indians may no longer be able to pencil him in as one of the playoff starters, which could have an impact on Cleveland’s postseason chances.