Dark Days Ahead For Notre Dame?

After finishing the 2015 season with a 10-3 record and ranked No. 11 in the nation (in the AP Poll; No. 12 in Coaches), fans of the Notre Dame Fighting Irish had every reason to look forward to the 2016 season. The team was going to lose a few guys to graduation and the NFL, but they were also going to get Malik Zaire back.

Yes, DeShone Kizer did an excellent job after Zaire went down, but you can’t have too many playmakers—can you? 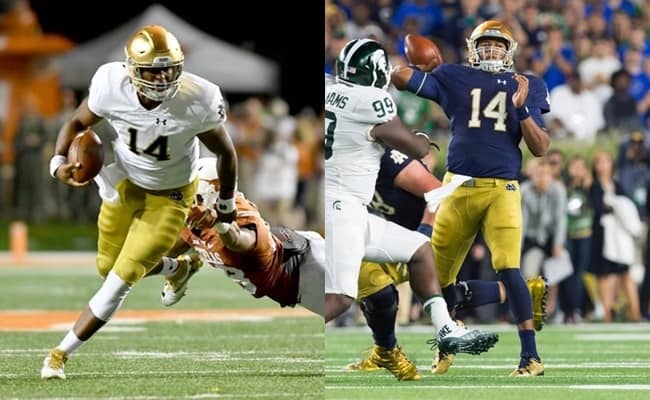 After one game, it was easy to see that Brian Kelly was going to need to stick with one quarterback. For the time being, it appears that he has settled on Kizer since he has the better passer between the two. With how the defense is playing, Kizer is going to be throwing the ball a lot.

Notre Dame got on the board first Saturday night against Michigan State after Kizer finished off a 91-yard drive with a 14-yard dash into the end zone—but then things began to fall apart. Michigan State took advantage of a fumbled punt to get on the board a few minutes into the second quarter, but went for two and took an 8-7 lead.

The score would be just 15-7 at the half, but then in about a ten-minute span in the third quarter, the game got out of hand.   It started with a ten-play drive by the Spartans that ended with Michigan State taking a 22-7 lead. Notre Dame answered by throwing an interception, and three plays later the deficit grew to 29-7.

Notre Dame went three and out on their next drive, and then two plays later Michigan State expanded the deficit to 36-7.

The defensive breakdown coupled with the lack of defense against Texas was enough for some fans. Many tweeted their thoughts on the kind of job they felt defensive coordinator Brian VanGorder had been doing and what Brian Kelly needs to do—fire him.

A small scandal was created when it appeared that Kelly had liked a tweet calling for VanGorder to be fired, but according to Kelly, he didn’t do it. A staffer did by accident.

“I have a number of people that manage my Twitter account,” Kelly said during a Sunday teleconference (ESPN). “Just obviously going through it, somebody unfortunately made a mistake as they were scrolling through, inadvertently hit it and just a mistake, an unfortunate mistake that was made by one of my staff members.”

Notre Dame’s defense is ranked 104th out of 128 teams through the first three weeks of the season—and they have yet to face the best offenses on their schedule.

If the defense can’t get it together, it could be a long season for Notre Dame fans—that is, unless the offense can turn into an insane scoring machine—which is entirely possible with the talent they have on the roster. With how the Fighting Irish offense exploded with three consecutive touchdown drives of their own to make the final score a respectable 36-28, the potential is certainly there.

The team should be able to handle Duke and Syracuse without much trouble, but they will need to start getting some more help from the defense when they hit a difficult four-game stretch against NC State, Stanford, Miami, and Navy. At this point in the season, it doesn’t look like Army is going to be an easy one either.

With the loss, Notre Dame fell out of the AP Poll for the first time in 20 weeks. Unless something changes, they may not be able to climb back in.