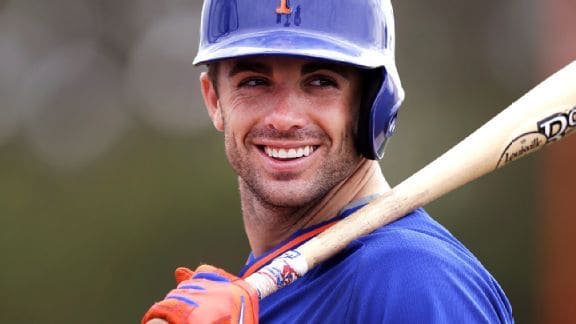 David Wright is a late scratch for the NY Mets.

Just a couple hours before Tuesday night’s series opener against the Washington Nationals, New York Mets’ manager Terry Collins was forced to remove third baseman David Wright from the lineup due to issues with his back related to his spinal stenosis, a chronic condition Wright was diagnosed with last year. Wright has missed plenty of games this season in order to give his ailing back the rest it needs to make it through the entire season; however, Tuesday was the first time Wright was forced to miss a game he was previously scheduled to play.

Collins explained to reporters after New York’s 2-0 win that during batting practice team trainers told him to speak to Wright. The manager says that Wright didn’t feel well, but felt obliged to play with the team also missing first baseman Lucas Duda, who was forced to sit out Tuesday’s game due to a stiff back. But Collins eventually convinced Wright that sitting out was the best thing to do, telling the Mets’ captain “I just said I can’t do that to you. I can’t do that to us, the organization. You sacrificing yourself tonight could lead to a month, who knows how long of not being in our lineup.”

Wright was predictably upset about being taken out of the lineup, but after the game admitted Collins pulling him was the right move. “It’s probably the right call. I mean, it is the right call,” he acknowledged. “It’s probably the best way to go about it. At the time, when you get the news that you’re being taken out of the lineup, obviously everyone in here you’ve got that competitive streak where you want to try to push it. Maybe Terry saved me a trip to the DL. Maybe he saved me missing multiple games. We’ll see how I feel tomorrow. And hopefully it’s better.”

Of course, Wright is optimistic that he’ll be able to return to the lineup on Wednesday, especially with the Mets set to face a left-handed starter in Gio Gonzalez. However, he admits nothing is certain. “It’s just day-to-day. And I think that’s the most frustrating thing — you just never know how it’s going to feel waking up,” he explains.

The fact that Wright couldn’t play when he was scheduled to do so, especially considering the Mets had an off day on Monday, is a concern for the Mets and their captain. “This is the first time this year where I’ve come to the ballpark where I felt the significance of it — the back. Most of the days have been fairly mediocre. Today was more toward the bad. I didn’t really know what to expect,” Wright said on Tuesday after New York’s win.

Wright concludes that he’s “mad at the situation.” He and the Mets have known since he received the spinal stenosis diagnosis last summer that his health would have to be monitored closely for the rest of his career. The team has done a great job managing him thus far, but this was the first time he missed a game he wasn’t supposed to. Obviously, the Mets hope this is a once-time occurrence, because if it’s a sign of things to come, there is great reason to be concerned.