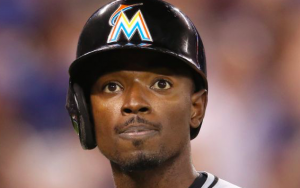 While the Miami Marlins continue to search for pitching on the trade market, the team will add an all-star second baseman on Thursday when the team activates Dee Gordon following an 80-game suspension for PED use. The Marlins will undoubtedly be glad to have Gordon back, as he can play a role in helping them reach the playoffs, despite the fact that the suspension makes Gordon ineligible to play in the postseason. Miami is currently locked in a tight race for the second wild card spot and is four games behind the Washington Nationals in the NL East.

On the eve of his return, Gordon released a video apologizing to the Marlins and their fans for his suspension. “I made a mistake, man, but just like in this game you’ve got to learn, come back and be stronger and better,” Gordon says in the video. “You’ve got to hold yourself accountable for your standards of living and training. I didn’t hold myself accountable for any of that. I thought I would never, being the smallest guy, I would never fail a drug test. I didn’t pay attention at all. I didn’t meet the standards. That’s my fault and no one else’s.”

While Gordon has been out, Derek Dietrich has gotten the bulk of the playing time at second base and filled in admirably, hitting .272 with 22 extra-base hits. With Gordon’s lack of action aside from 35 at bats at triple-A and Dietrich’s steady play, Miami manager Don Mattingly may have some difficulty matriculating Gordon back into the every day lineup, especially since he got off to such a sluggish start the first few weeks of the season before the suspension.

“I can’t tell you that I have an ironclad plan of how we’re going to do it,” Mattingly says. “It will be more of a blend than just throwing him into the fire. So, that’s kind of the way we’re talking about it.” The skipper says the lack of live game action for Gordon at this point in the season is a concern. “100 at-bats is not a lot of at-bats. So you’re not at the right pace. It takes a while to get back to that,” Mattingly said.

Of course, Mattingly admits that the Marlins are a better team with Gordon in the lineup, as the reigning National League batting champion provides plenty of speed and strong defense up the middle. Still, the manager ponders: “Knowing that [Gordon] can’t play in the playoffs, how do we blend that mix together, keep going to where we want to go, get to where we want to go, and keep everybody a part of that mix? That’s what we have to balance as we moved forward.”

Gordon being back with the Marlins creates plenty of questions that only time can answer. However, having the option to play him is certainly better than not having him. The Marlins have already proven they can be a competitive team without Gordon in the lineup, and so his presence should only help them in their quest to reach the postseason, even if Gordon won’t be available to join them if they get there.