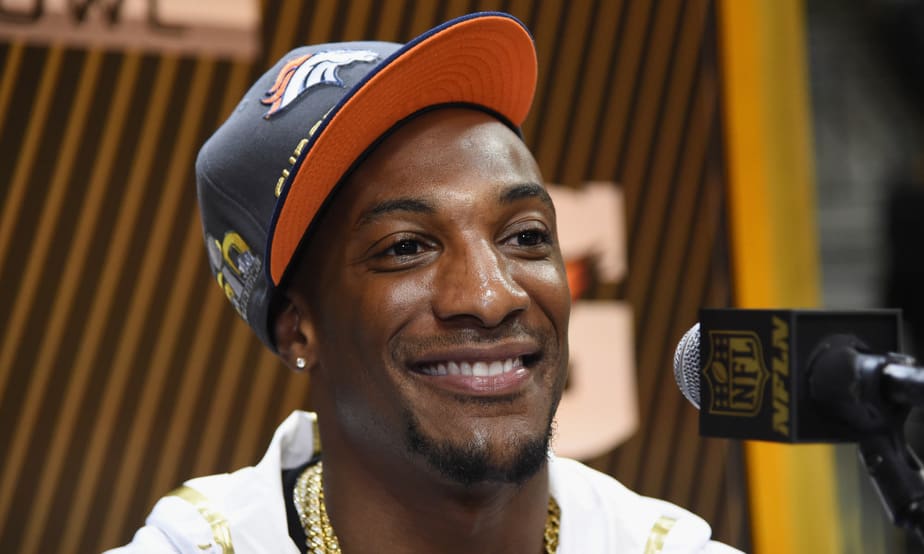 During the off-season, no news is typically good news for NFL fans. When they do here about their favorite players, it is because they were caught going 200 MPH in a school zone, carrying a gun through an airport check-in, smoking a field of pot, hitting their girlfriends, trashing a house, or shooting up a strip club.

So when Denver Broncos fans saw the name of their star cornerback, Aqib Talib, in the news they knew it couldn’t be for anything good—and it wasn’t. The man had been shot at a strip club in Dallas.

Luckily, it was nothing serious. According to local news reports, the police report said that Talib was shot in the rear of the right thigh, and the bullet exited out his right calf. By some miracle, the bullet didn’t hit any bone, arteries, or ligaments. He needed a few stitches to close up the wound, and that was about it.

It was enough of an injury for the hospital in Dallas to hold onto him for the night and release him on Monday. Several news outlets reported him as having been released on Sunday, but that was not the case.

Exactly what happened is a mystery, and it will likely remain one because Talib is not talking. His first response to the Dallas Police was that he had been hanging out at a local park with friends, but police believe he was at the scene of a reported altercation at the V Live strip club in Dallas.

Rumor has it that he was a part of an incident that started inside the strip club before it moved outside. TMZ has posted a video from the altercation outside of the club where four shots can be heard, but Talib cannot be identified in the clip.

Police are investigating Talib’s injury and the strip club shooting, but they are not expected to find out much, if anything. Talib says he was too drunk at the time to remember anything and has no idea who shot him.

According to a rumor making its way around the internet, he may have told friends and family that he shot himself.

Talib has been involved in several incidents in the past but has never faced charges since no one has ever talked to the police. He has been suspended by the NFL in the past and could very well face a suspension again.

The NFL is investigating the incident, but if the police are having no luck, it is hard to see the NFL’s investigators doing any better.

The truth may very well never come out, but either scenario does not look good for Talib, who got married just a few months ago. Roger Goodell is not going to look favorably upon one of the NFL’s more prominent players being drunk and handling firearms whether it was at a park where kids play or at a strip club.

So far, all the Broncos have said is that Talib is expected to be okay and that they have been in contact with him.