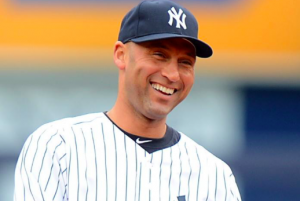 It’s been all but confirmed that Miami Marlins Jeffrey Loria is interested in selling the club, and may be looking to do so quite soon. A number of interesting names have been linked to the potential sale of the Marlins, including New York Yankees legend Derek Jeter. According to a report from Fox Business, Jeter has an interest in making a bid to buy the Marlins and has a representative in talks with Marlins President David Samson.

According to the Fox Business report, there are at least three possible bidders in the mix, including Jeter. The former Yankee captain and is being represented by Gregory Fleming, an investment banker with close ties to Wall Street, including Morgan Stanley.

Another possible bid comes from a group being led by former Florida Governor Jed Bush. The one-time Presidential candidate is reportedly working with Citi Group on a bid for the Marlins. Bush’s brother, former President George W. Bush, was once co-owner of the Texas Rangers, and so the family has baseball ties.

There is a third group with interest in the Marlins that is being backed financially by Goldman Sachs. This group lacks notoriety but does have a history of sports-related investments. The group has no relation to the Kushner family, who has been linked to the potential sale of the Marlins in recent months but no longer appears to be involved in the bidding.

With regards to Jeter, it should not come as a surprise that he’s interested in owning a team. He’s been retired for more than two full seasons, and since the end of his career, the future Hall of Famer has hinted that he may want to own a team one day.

“I’ve made it very clear of ownership aspirations at some point,” Jeter said in December. “Who knows when that is, who knows if you get the opportunity. I hope I do.”

However, buying the Marlins is far from a sure thing for Jeter. MLB Commissioner Rob Manfred would have to approve the sale of a team, and while Jeter in the owner’s chair would be a no-brainer from a PR perspective, it’s believed that Manfred would not approve the sale of a team if the new owner requires financing to complete the transaction. It appears that both Jeter and the group led by Jed Bush would need outside financing, which could hold up a deal.

“From what I understand whoever has the most cash will get the deal,” one senior baseball executive told Fox Business on the grounds of anonymity. “And who knows what the Marlins might do in the end if they don’t get the number they want.”

Loria has not been shy about his desire to sell the Marlins, a club he purchased in 2002 for $158 million. However, Loria only appears motivated to sell if he receives an offer that matches the price in his head. That price appears to be around $1.6 billion, which is a pretty penny for a club that has some potential but doesn’t exactly have the reputation for bringing in loads of revenue.

Where exactly Loria and the Marlins are in the process of selling the team is unclear at this time, although the Fox Business report suggests a deal could be in place as early as next month. It’s also unclear how Jeter’s bid may stack up against the others. However, Jeter’s involvement in the process certainly adds an interesting wrinkle to the possible sale of the Marlins.