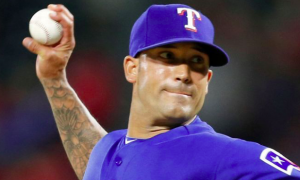 It’s been a quiet offseason for the Texas Rangers. Outside of re-signing Carlos Gomez, the reigning AL West champs have yet to make any moves to address the holes on their roster, including the back end of their starting rotation. Outside of the trio of Cole Hamels, Yu Darvish, and Martin Perez, there are some questions about the team’s starting pitchers. One possible internal solution is Matt Bush, a former top overall pick who finally reached the majors for the first time in 2016. However, the Rangers have decided to leave Bush in the bullpen rather than turn him into a starter.

Bush, as most people know, endured an unbelievable odyssey to make it to the majors. He was the top overall pick in the 2004 draft. Originally a shortstop, he was later converted into a pitcher but soon forced to undergo Tommy John surgery. A series of off field problems caused Bush to bounce from one organization to the next, and he ultimately served more than three years in prison before signing with the Rangers in December 2015.

After 12 impressive outings out of the bullpen at double-A early in 2016, the Rangers promoted Bush to the big leagues and he made his long-awaited MLB debut in May. Bush gradually grew into an important part of the Texas bullpen, going 7-2 with a 2.48 ERA in 58 appearances.

With his past seemingly behind him, the Rangers could have considered trying Bush out as a starter during spring training. He could have joined a competition for the final two rotation spots alongside Andrew Cashner, A.J. Griffin, Nick Martinez, and Chi Chi Gonzalez. Earlier this offseason, both Rangers GM Jon Daniels and manager Jeff Banister mentioned that while Bush would come to spring training as a reliever, they wanted to keep all options on the table.

“[He has] a lot of things you would look for in a starting pitcher,” Daniels said about Bush. “The flip side is the unknowns. He hasn’t pitched a whole lot given his background as a converted shortstop and missing time. There’s so much unknown. He hasn’t been trained as a starter. He hasn’t built up innings.” Those unknowns have caused Daniels to definitively say that Bush will remain in the bullpen heading into 2017, a decision that seems to work for Bush.

“I’ve never started professionally. I feel great with where I’m at as a reliever right now. I feel like it’s the best place for me right now. I still have some building to do with my arm. My career is very young. I just want to continue to do what I did last year,” Bush said. “I feel really good about the season last year. I was able to stay healthy, stay strong and contribute to a winning team.”

Bush will now remain in a bullpen that looks solid on paper and includes a slew of quality right-handers, including Sam Dyson, Jeremy Jeffress, Tony Barnette, and Keone Kela. What kind of role Bush will have amidst so many other talented pitchers is uncertain, but Daniels believes Bush has “the potential to be the best of the whole bunch,” which is part of the reason for keeping him in the bullpen.

“He was dominant once he got his legs under him last year,” Daniels said. “The opportunity cost of taking a reliever out of the bullpen, that’s part of the thought process. His role might be more important now than if he became a decent, not great starter.”

The Rangers would be wise to add another trustworthy starter to their rotation, but keeping Bush in the bullpen seems like the best decision. It took a long time for Bush to reach the majors, and now that he seems to have found his comfort zone in the bullpen, it would be a mistake to take him out of that comfort zone. With Bush remaining in the bullpen, we’ll now have a chance to see just how good the former first overall pick can be.