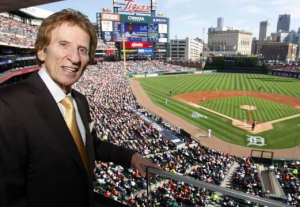 The sports world and the city of Detroit have suffered a great loss. Detroit Tigers owner Mike Ilitch passed away Friday, according to his family. He was 87 years old. In addition to owning the Tigers, Ilitch also owned the NHL’s Detroit Red Wings and pizza chain Little Caesars. He is survived by his wife, Marian Ilitch, seven children, and many grandchildren.

“My father was a once-in-a-generation entrepreneur, visionary and leader, setting the tone for our organization and our family. He made such a positive impact in the world of sports, in business and in the community, and we will remember him for his unwavering commitment to his employees, his passion for Detroit, his generosity to others and his devotion to his family and friends.

“Together my family and the company celebrate the tremendous man he was, and we will continue to work hard to uphold his remarkable legacy. I’m honored to have had the opportunity to work with him to nurture and grow our businesses, but mostly, I’m grateful to have called him my Dad, and I know my siblings feel the same.”

A family spokesperson says that Ilitch died Friday in a hospital. However, no other details about his passing are being reported at this time.

Ilitch once signed with the Tigers as a minor leaguer in the 1950s, although he never made it to the big leagues. He became owner of the Tigers in 1992 and was instrumental in the building of Comerica Park, the team’s current home.

Following a record-setting 119-loss season in 2003, Ilitch vowed to seriously invest in the franchise and turn the Tigers into a team capable of winning the World Series. The team reached the World Series three years later, and did so again in 2012. While the franchise didn’t win a world championship under Ilitch’s leadership, the Tigers have remained relevant, recently winning four straight AL Central titles from 2011 to 2014.

“I’ve never seen a man more dedicated to this community and to baseball than Mr. I,” Tigers GM Al Avila said Friday evening. “What he has done for this franchise, and for Detroit, is immeasurable. He was always there to give us whatever we needed because he wanted greatness and happiness for all of us — especially the fans. Mr. I was truly one of the great ones. He was a friend and an inspiration and he will be deeply missed.”

Several current and former Tigers players have expressed their grief at Ilitch’s passing on social media, including longtime ace Justin Verlander, who tweeted: “Heartbroken hearing of Mr I’s passing. He was a family man. A self made man. A giving man. An icon for our city and nation. #RIPMrIllitch.”

After the Tigers won the American League pennant in 2012, Verlander gave much of the credit for the team’s success to Ilitch. “I think this team in general has an amazing amount of respect for Mr. Ilitch and what he’s done, not only for this ballclub but also for the city,” said Verlander. “If he didn’t put this ballclub together, this wouldn’t be happening, and it wouldn’t be this way for the city right now. He’s the best owner in baseball.”

Christopher is expected to takeover the day-to-day responsibilities with the Tigers, as he continues his father’s quest to bring the city of Detroit a World Series title.

All of us at Sports Information Traders send our condolences to the Ilitch family, the Tigers, the Red Wings, and the city of Detroit.