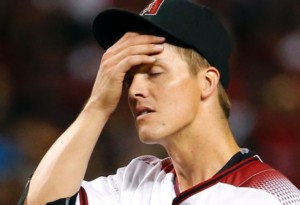 The Arizona Diamondbacks won’t be trading Zack Greinke this offseason. This is according to a USA Today report released Thursday. The Diamondbacks signing Greinke to a six-year, $206 million contract last offseason was one of several high-profile moves the team made that were supposed to set them up to be competitive in the NL West this season.

However, a slew of injuries and disappointing performances have them towards the bottom of the standings once again, leading many to believe Greinke could be traded as the first step in a re-building process. However, those within the organization are saying that Greinke will not be traded this winter, as the Diamondbacks believe they’ll be able to contend for a playoff spot in 2017.

Talk of Arizona trading Greinke surfaced earlier this week when the Los Angeles Dodgers reportedly approached the Diamondbacks about re-aquiring Greinke, who spent the last three years in Los Angeles. The Dodgers have been hit with a massive amount of injuries to their starting rotation, and still have several notable pitchers on the DL, including ace Clayton Kershaw. Naturally, the Dodgers approached Arizona about a trade involving Greinke to reinforce their rotation before the start of September. However, those trade talks did not get far.

Greinke is in the midst of the worst season of his career since establishing himself as a big league starter nearly a decade ago. Despite a 12-4 record, he’s posted a 4.17 ERA and has seen his strikeout rate decline for the second straight year. Greinke also missed a month of action earlier this year with an oblique strain.

The Diamondbacks say that may consider trading Greinke next summer if the team once again fails to compete for a playoff spot. Of course, that stance could change and the Diamondbacks could consider trading him this winter if there is a change made in the front office. There has been recent talk about the team’s ownership being unhappy with chief baseball officer Tony La Russa and GM Dave Stewart. If a change is made, the new front office in Arizona could view Greinke differently.

Despite Greinke being key to Arizona competing next season, it may be best to free themselves of his monster contract in case his performance continues to decline steadily and he becomes impossible to trade. The Diamondbacks would undoubtedly need to eat some of the money on Greinke’s contract if he were traded, as his value is lower than it was a year ago, but losing most of his contract would give them salary relief and more payroll flexibility moving forward.

If the Diamondbacks do make Greinke available this winter, or even next summer, the Dodgers figure to be the most likely destination. Los Angeles has money and has proven in the past it’s not afraid to throw it around. The rash of injuries the Los Angeles rotation has experienced this year may have them concerned about the pitchers who are signed beyond this year who have missed time with injuries, including Kershaw, Scott Kazmir, and Brandon McCarthy. Bringing in Greinke could give them additional depth, as well as a potential ace.

From Arizona’s perspective, it’s certainly tempting to want a do-over in 2017 after all the misfortunes the team has endured this season. Without Greinke at the top of the rotation, Arizona’s chances of competing in the NL West next season go way down. However, for the long-term health of the organization, it may be best for the Diamondbacks to entertain the idea of trading Greinke this offseason.