Posted on September 26, 2016 by Bryan Zarpentine 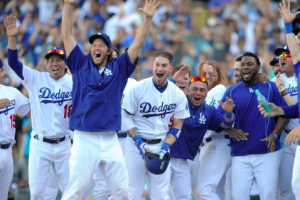 In a season that’s been defined in large part by injuries, it seems fitting that it would be someone from the periphery of the roster that lifted the Los Angeles Dodgers to a division title. In the 10th inning of Sunday’s game against the Colorado Rockies, backup infielder Charlie Culberson hit his first big league home run of the season in just his 57th big league at bat of the season. That home run gave the Dodgers a 4-3 win and officially made them National League West champions in 2016. It is the 4th straight division title for the Dodgers, who were once again able to hold off the San Francisco Giants.

This may be the most unlikely of the four straight division crowns the Dodgers have won. Los Angeles has placed 32 players on the DL over the course of the season, with the team’s starting rotation being hit particularly hard. The Dodgers have been forced to use 15 different starting pitchers this year, including 11 who made at least five starts.

Also unlikely is the fact that the Dodgers somehow made their move towards the top of the division after ace Clayton Kershaw was forced to the DL at the end of June. At that time, the Dodgers trailed the Giants by eight games and were a sub-.500 team in games started by anyone who wasn’t Kershaw. “Obviously it looked bleak for a second, eight games out, but the way the team responded to all the injuries, and the consistency from the position players, that gets overlooked,” Kershaw said after Sunday’s clincher.

“I really think the turning point was a couple days after Kersh went down,” explained GM Farhan Zaidi. “You lose the best player in the game, you’re going to spend some time feeling sorry for yourself. And then it’s how you move on from that moment. Make no mistake, having him back these past few weeks has been a huge boost too.”

Manager Dave Roberts says he’s been thrilled with the never-say-die attitude his team has had this season, helping the Dodgers completer 45 comeback wins. That includes Sunday when the Dodgers fell behind 2-0 early, ultimately needing a home run from Corey Seager in the bottom of the 9th to force extra-innings before Culberson’s walk-off homer in the 10th inning to win 4-3.

“The thing I’m most pleased with is we’ve made no excuses and we’ve persevered,” Roberts said. “We’ve got a tough group of players. In life and in sports there’s always talk about accountability and reasons why you don’t have success, but our guys don’t have that and I think that’s the thing I can hang my hat on”

The walk-off win to clinch the division was also the perfect way to send off Vin Scully, who broadcast his final game on Sunday. Scully admitted on air that he was hoping for a 10-0 win so there would be no tension, but both he and Los Angeles will take the dramatic win. “The Dodgers have clinched the division,” Scully said on the air following Culberson’s home run. “And will celebrate on schedule.”

The Dodgers now turn their attention to the postseason, knowing they will face the Washington Nationals in the NLDS. The Nationals begin Monday with one more win than the Dodgers, giving them a slight advantage heading into the final week of the season with regard to home-field advantage in their best-of-5 series. On paper, the Nationals and Dodgers are as tight as can be, and so home-field advantage should be something that both teams covet, giving Los Angeles something meaningful to play for the final week even after locking up its 4th straight division title on Sunday.